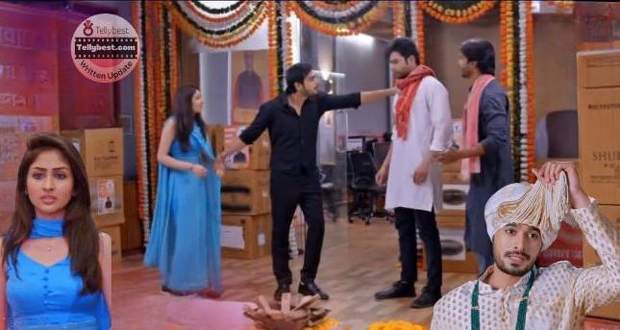 Today's Parineeti 23rd December 2022 episode starts with Rakesh questioning Pari why she causes his anger as he does not like it when Pari gets hurt.

Meanwhile, Neeti tells Rajeev that it would have been great if Pari came with them as she would have loved to meet Pratiksha.

On the other hand, in the kitchen, Rakesh forces Pari to drink the orange juice and despite dizzy Pari’s weak protest, Rakesh makes Pari drink the juice.

Afterward, while Neeti is telling Rajeev that Vishal and Rajeev both are gone from the party, Rajeev looks up he notices Rakesh dressed up as a waiter dragging Pari out in a torn-out blanket.

Rajeev then urges Neeti to stop talking for some time as he wants to check the waiter but Neeti does not let him go.

On one hand, Neeti questions Rajeev about Pari, on the other hand, Rakesh drives away with Pari in the backseat of his car.

Later, in the room, Gurinder gets a call from Rakesh who informs her about his successful abduction of Pari.

At first, Gurinder is not able to believe it but when Rakesh announces that now he will marry Pari, Gurinder jumps in excitement.

After cutting the call, Gurinder is screaming in happiness when Rajeev arrives there and questions Gurinder if she has seen Pari.

Gurinder then starts stuttering that she does not know about Pari and even suggests Rajeev not focus on Pari since she is bad luck causing Rajeev to fume in anger.

Rajeev orders Gurinder to stop as he will not listen to anyone uttering bad words against Pari and Gurinder closes her mouth.

Once Rajeev walks away, locking the door, Gurinder jumps on the bed to dance to the song “Drama queen” but ends up twisting her ankle.

Meanwhile, in Rajeev’s room, Rajeev finds Neeti sitting on the couch and offers to massage her feet.

Hearing this offer, Neeti announces she cannot let her husband do it and Rajeev hugs her tightly.

He even whispers to Neeti that today on this moonlit night so he wants to spend it with his beautiful wife, Neeti.

However, after switching the lights, Rajeev hugs Neeti from behind to plant a kiss on her shoulder causing Neeti to breathe fast.

Rajeev then makes Neeti sit on the sofa lovingly and Neeti starts romancing her fingers on Rajeev’s face with love and tenderness.

When Rajeev picks Neeti in his arm, they both hear Chandrika’s voice and run to check on her.

They then find Chandrika narrating to everyone how she caught two goons abducting a girl but before she can run away from there, one of the goons hit her on the head and locked her in the storeroom.

When Parminder orders everyone to think about the girl who got kidnapped, Neeti screams that she has not seen Pari for a long time.

Everyone then starts searching for Pari and outside the house, Monty finds Swati unconscious.

While everyone is busy with Swati, Monty, Rajeev, and Neeti find the waiters unconscious near the food counter and Rajeev announces Pari is kidnapped.

Later while Neeti and Parminder are panicking, Rajeev informs everyone that he is going to the police station.

© Copyright tellybest.com, 2022, 2023. All Rights Reserved. Unauthorized use and/or duplication of any material from tellybest.com without written permission is strictly prohibited.
Cached Saved on: Wednesday 25th of January 2023 01:16:48 PMCached Disp on: Tuesday 31st of January 2023 06:16:45 PM