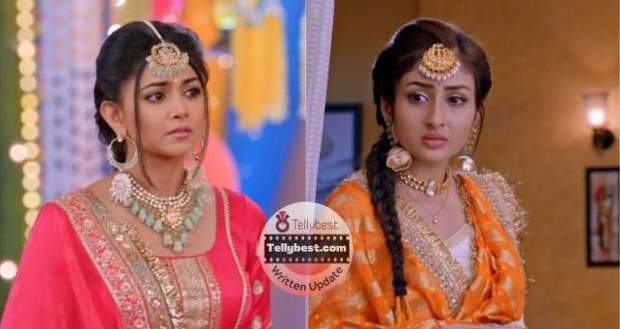 Today's Parineeti 23rd January 2023 episode starts with Sukhwinder telling Gurpreet that she feels sorry for Pari as Rajeev is not here with Pari during her first Lohri.

Gurpreet gets confused to hear it so she points towards Rajeev who is standing near Pari but when Sukhwinder turns around, she finds Sanju standing with Neeti.

She tells Gurpreet that it is Sanju but not Rajeev and they get into an argument about it as Rajeev switches places each time to avoid anyone’s suspicion.

While Gurpreet and Sukhwinder are still confused, Rajeev feels stressed and mumbles that he never knows how kings used to keep many wives together.

Afterward, when Neeti asks Rajeev why he is suddenly disappearing, Rajeev informs her that he is doing cardio to stay fit.

Rajeev thinks he is practicing how he will hide when the truth will be out but as soon as Neeti repeats her question, Rajeev drags her away.

Meanwhile, Gurpreet and Sukhwinder urge Babli to take them to Rajeev so she can clear Sukhwinder’s confusion.

To change the topic, Babli tells Gurpreet that she has fallen in love and drags her away to introduce her to the boy.

On the other hand, Rajeev demands a kiss from Neeti by saying that winter is the perfect time for romance while Neeti teases him for being a coward in front of Biji always.

When Neeti urges Rajeev to reveal how he won Biji’s heart, Rajeev reveals that it was easy for him to win Biji’s heart.

Recalling how Biji took an emotional demand for a child from Rajeev, he gets teary-eyed and gets upset as he thinks that marriage has become a fiery path for him.

Later, while Pari and Rajeev are discussing how they will do the pheras in front of everyone, Biji puts her hands on their shoulder and orders them to do the pheras.

During the phera, Rajeev holds Neeti’s dupatta whereas Pari holds Rajeev’s kurta and they start circling the holy fire together.

However unfortunately Sukwhinder notices this and orders Babli to tell Pari that she can only hold her husband’s kurta. not others.

While Babli is contemplating how to deal with the mess, Sukhwinder decides to tell Pari this and starts walking toward her.

Meanwhile, Pari prays to God for Neeti and Rajeev’s well-being whereas Neeti wishes to be with Rajeev forever.

At the same time, Rajeev feels confused as he does not know what to ask from God, as on one hand, he respects Pari a lot, and on the other hand, he loves Neeti very much.

Just when Sukhwinder is about to tap on Pari’s shoulder, Vishal appears all of a sudden and he holds Pari’s dupatta.

Gurpreet gets confused since she does not know about Vishal and after the pheras, everyone starts dancing together.

Later, while Vishal is standing alone, Neeti surprises him from behind and praises him for arriving there on time.

When Neeti mentions Pari is very happy, Vishal thinks he is suffering a lot for Pari’s happiness.

On the other hand, Gurpreet gets upset when Babli tells her that she lied about having a boyfriend as she wanted to stop the argument.

Back to Vishal and Neeti, Neeti calls Pari and urges her to stop Vishal from going so they can have a family dinner together but Pari announces that Vishal should go since he has meetings.

Looking at Pari and Vishal's awkwardness around each other, Neeti feels that she is sure there must be something wrong between them.

© Copyright tellybest.com, 2022, 2023. All Rights Reserved. Unauthorized use and/or duplication of any material from tellybest.com without written permission is strictly prohibited.
Cached Saved on: Wednesday 25th of January 2023 08:47:31 AMCached Disp on: Tuesday 31st of January 2023 07:02:09 PM