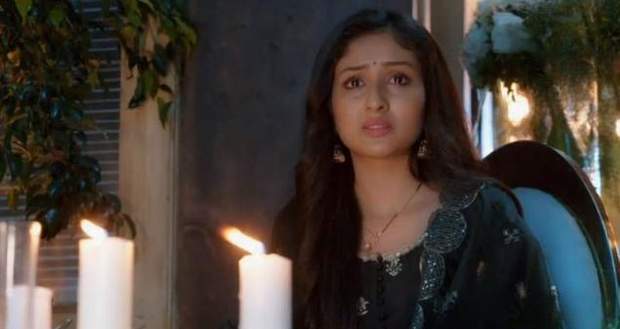 Today's Parineeti 23rd July 2022 episode starts with Parineeti asking Raj what is he doing in a couple’s restaurant.

Raj feels puzzled while Parineeti looks at him suspiciously.

Making an excuse, Rajeev calls Monty but he keeps disconnecting the call because he is playing a game.

Rajeev tells Monty that Pari has come where he has gone on a dinner date with Neeti.

Rajeev tells Monty that he doubts that Pari is suspicious of him because of the lipstick mark on his shirt.

Monty tells him that he can manage two wives with his wit and charm.

In the meantime, Chandrika asks Simmi to keep calm and not take out her anger on the children.

Simmi tells her that she will not let her make noodles for the children.

Simmi threatens Chandrika to throw her out along with the children.

Meanwhile, Rajeev is about to confess to Pari when Neeti taps him on the back.

Neeti questions him for behaving suspiciously but Rajeev tells her that he has eaten a lot of Pakodas and is now feeling acidic.

Rajeev thinks of sending Pari away while Neeti calls him inside.

After a while, Kavita tells Pari that number games are better than understanding games.

Later, DJ distributes the chits to everyone and asks to keep the number secret.

Kavita tells Pari to open the number and if it matches with another then it is Rab Ne Bana Di Jodi.

Rajeev worries about his secret coming out whereas Kavita opens Pari’s number which is similar to Rajeev.

Meanwhile, Neeti is on call and does not see Pari who bends down to pick the chit.

Rajeev decides to leave when Pari sees him and goes on stage.

After a while, Neeti is coming inside when she remembers her purse and goes back to get it.

Both Pari and Rajeev go on stage where DJ offers him a trophy.

Rajeev is worried about Neeti coming inside while Pari looks at his worried face.

Pari tells him that he must be feeling awkward because he has not come with her.

Pari is in a dilemma ever since she has seen Rajeev with a girl and has seen a lipstick mark on his shirt.

DJ asks him if they know each other from before but both remain quiet however, Kavita tells her that they both are husband and wife.

Later DJ asks Rajeev to tell him about their compatibility.

Acting shy, Rajeev tells Pari that he does not like talking about their special relationship in public.

© Copyright tellybest.com, 2020, 2021. All Rights Reserved. Unauthorized use and/or duplication of any material from tellybest.com without written permission is strictly prohibited.
Cached Saved on: Friday 30th of September 2022 07:49:20 PMCached Disp on: Saturday 1st of October 2022 01:36:04 AM