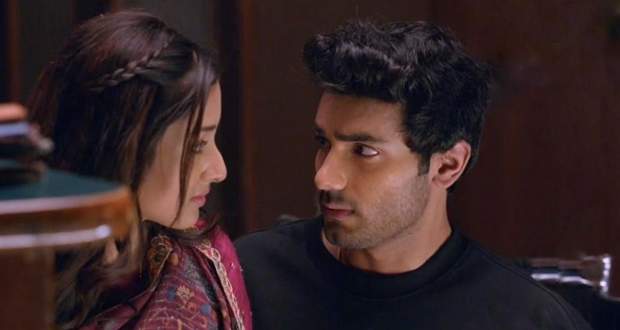 Today's Parineeti 23rd May 2022 episode starts with Neeti requesting the nurse to let her enter the bank at her place.

Later, Neeti convinces the nurse and gets an extra uniform from her.

On the other hand, Rajeev shares his feelings for his father and Parineet feels good after Rajeev opens up a bit.

Meanwhile, Neeti fakes an accident to keep the nurse busy and replaces herself instead.

Later, Pari and Rajeev find Monty and peek out of the window.

Monty teases Rajeev for getting close to Neeti and Parineet all at once, but Rajeev denies it.

Meanwhile, Neeti sneaks in with the doctor inside the bank.

The doctor is threatened to be killed and Neeti's secret is exposed as one robber recognizes her.

On the other hand, Rajeev saves Pari again while Monty smiles.

Meanwhile, Neeti tries to cover up and saves herself from the robbers by saying that she is actually a nurse and that her fiance coming to the bank at the same time was merely a coincidence.

Later, Simmi and Vikram quarrel while they try to find a solution to help Pari and Rajeev.

Meanwhile, a hostage tries to escape with his wife while the robbers shoot at the lock and break open the door of Rajeev and Parineet's room.

On the other hand, Neeti attempts to find Sanju and Vikram uses a rope to climb through a window of the bank.

Later, Rajeev notices Neeti and they hug while they express their concern for each other.

Meanwhile, Pari runs toward Rajeev but falls to the ground.

© Copyright tellybest.com, 2020, 2021. All Rights Reserved. Unauthorized use and/or duplication of any material from tellybest.com without written permission is strictly prohibited.
Cached Saved on: Sunday 2nd of October 2022 04:03:46 PMCached Disp on: Friday 7th of October 2022 08:57:21 PM