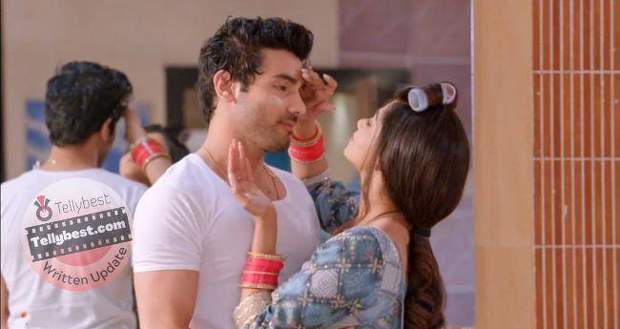 Today's Parineeti 23rd November 2022 episode starts with Rajeev questioning the pandit about how long this puja will take to which Biji asks him if he needs to go to the washroom.

After announcing the puja is ended, the pandit again orders Pari and Rajeev to take the marriage oath which shocks them both.

Biji tells Rajeev that nowadays people forget about their promises very soon when Rajeev questions the pandit about why they need to take the marriage oath again.

Meanwhile, Rajeev starts thinking that he has taken fourteen promises already and his soulmate Neeti is not here.

On the other hand, Pari feels heartbroken as she does not want to go through the same pain again.

Elsewhere, while Babli and Monty are arguing with each other about how to stop Neeti, Simmy arrives there and sarcastically remarks that Monty is getting too close to Babli.

When Monty request Simmy to help them, Simmy denies it as she wants Neeti to know the truth so she can get rid of Pari.

On the other hand, Pari and Rajeev take their marriage oath hastily while Rajeev keeps turning back to check whether Neeti is coming.

In the meantime, Monty and Babli are shocked to see Neeti walking away and follow her hurriedly.

Later, finding Neeti in the hallway, sacred Rajeev whispers this to Pari who in return starts praying to God for Neeti not learning the truth.

Pari even tells God that Neeti cannot bear the same pain she is going through and she feels relieved when Babli takes Neeti away.

Afterward, Babli complains to Neeti that Monty is teasing her about the dress whereas Monty says Babli has started liking him to which Neeti replies that it will be amazing if Babli and Monty get married.

While Babli rolls her eyes, Neeti announces that she has to go since she does not want Biji to think negatively of her.

Babli and Monty inform Neeti that puja has ended but Neeti walks away just to show Biji her face.

On the other hand, the pandit orders Pari and Rajeev to take the elders’ blessing.

When Pari and Rajeev lower their head to take Biji’s blessing, Neeti arrives there and gets angry.

On one hand, Biji gives Pari and Rajeev the blessing of a baby; on the other hand, looking at Neeti, Rajeev is sure Neeti has learned the truth.

Later, Rajeev tells upset Neeti that it was a coincidence while Neeti just nods and Pari is watching from behind.

Afterward, Pari urges Neeti to take Biji's blessing and when Neeti goes to do it, Biji compares her with Pari which causes Neeti's face to fall.

Biji then starts praising Rajeev making Neeti confuse as she thinks Biji does not know the truth about Rajeev being a bad husband.

© Copyright tellybest.com, 2022, 2023. All Rights Reserved. Unauthorized use and/or duplication of any material from tellybest.com without written permission is strictly prohibited.
Cached Saved on: Wednesday 23rd of November 2022 11:20:12 PMCached Disp on: Tuesday 29th of November 2022 09:39:40 AM