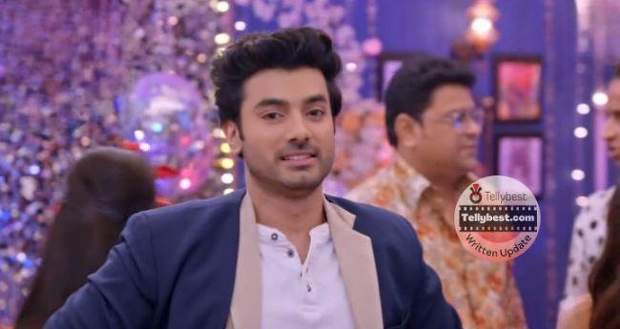 Rajeev urges Neeti to calm down as stress is not good for the baby but Neeti looks away.

Meanwhile, Pari is running in a field while her hands and mouth are tied with clothes and she hides behind some bushes.

While Pari is holding her breath, Rakesh and his friend both are searching for Pari.

On the other hand, in Bajwa’s house, Biji tells everyone that she will neither take her medicines nor eat food in a tear-choked voice.

Looking at Biji sternly, Gurinder thinks Biji needs to stay alive until she gives the property to Neeti.

Gurinder further tells herself that she is pleased that Pari is gone from this house and now she will dominate Neeti.

Elsewhere on the field, Rakesh sees a glimpse of Pari’s dupatta and walks towards the bush with a sly smile.

He then surprises terrified Pari from behind with a song and although Pari tries to run away, Rakesh grabs her arms.

Rakesh even snatches Pari’s dupatta away causing Pari to cover her body with her tied hands.

However, Rakesh returns Pari’s dupatta to her reminding himself that he will snatch the dupatta after marriage.

Rakesh and his friend drag Pari away despite her feeble request to let her go.

Later, on one hand, Rakesh pushes Pari to the back seat of his car and ties her legs; on the other hand, Rajeev passes Rakesh’s car without noticing Rakesh.

As Neeti expresses her worry to Rajeev, Rajeev informs her that he saw Rakesh’s car but when they turn back, they don’t find Rakesh’s car.

Meanwhile, during the drive, Rakesh tells his friend that Indian girls become very devoted after marriage so there is no risk whereas Pari feels sorry for herself thinking Rajeev does not love her but this Rakesh is mad about her.

Pari even feels it is better to die instead of getting married to Rakesh.

On the other hand, at the police station, the police officer refuses to take Pari’s missing complaint once Neeti informs him about Rakesh being the kidnapper.

Hearing this, Neeti begs the police to investigate but the police officer is firm on his decision.

When Neeti announces that Pari got abducted just one hour ago, the police officer urges the constable to come and once the constable arrives, the officer questions him about his lunchtime.

As the constable informs the police officer that he took one hour for lunch, the police question Neeti and Rajeev if they will call this person missing.

Further, the police officer orders Neeti and Rajeev to wait till twenty-four hours are passed while Neeti looks disappointed.

In the meantime, Rakesh brings terrified Pari out once they reach his party office factory and starts dragging Pari inside while muttering he will organize the reception in Bollywood style.

Pari however drops her bangle without anyone's noticing in a hope that Rajeev and Neeti will come looking for her.

Later, Rajeev gets a call from Monty who questions them if the police lodged the complaint or not and Rajeev denies it.

When Monty reveals this news in the home, everyone looks worried except Gurinder who thinks once Rajeev reaches Barnala no one will be able to save Pari.

In the meantime, Neeti decides to make the police officer start Pari's investigation.

© Copyright tellybest.com, 2022, 2023. All Rights Reserved. Unauthorized use and/or duplication of any material from tellybest.com without written permission is strictly prohibited.
Cached Saved on: Wednesday 25th of January 2023 01:21:00 PMCached Disp on: Monday 6th of February 2023 05:25:40 AM