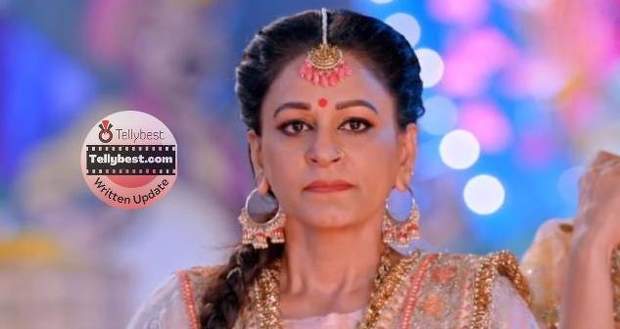 Today's Parineeti 24th January 2023 episode starts with Rajeev arriving where Pari and Vishal are talking to each other.

Vishal gets surprised to see Pari’s love for him and asks Rajeev what he saw in Neeti as Pari loves Rajeev selflessly.

When Rajeev mentions that he does not want Neeti to suffer any trauma as it will affect her unborn baby, Vishal accuses him of creating more problems in everyone’s life.

Vishal angrily walks away after announcing that he has a personal life too but unfortunately Neeti notices Vishal walk away and runs behind him.

While Vishal is walking towards his car feeling frustrated, Neeti orders him to stop in a loud voice and urges him to stay.

On the other hand, Biji orders Chandrika to give her a foot massage, and while Chandrika is busy massaging Biji’s foot, Biji informs Parminder that she is glad that Gurinder’s two daughters-in-law are very polite compared to Gurinder.

She even announces that she wants Chandrika and Amit’s baby too which makes Chandrika blush.

Back to Pari and Neeti, Neeti calls Vishal a coward who is running away instead of solving problems with Pari causing Vishal’s nostrils to flare due to anger.

Vishal calls Rajeev a thief for lying to his wife making Neeti angry as she cannot tolerate any bad words against Sanju and they start yelling.

Neeti and Vishal continue arguing with each other and Vishal even announces that his life is messed up due to Neeti.

Neeti is too much angry to realize what Vishal is saying and they continue their heated argument despite Pari's pleading.

Pari gets frustrated when no one listens to her and requests Neeti not to poke her nose in her and Rajeev's (Vishal) business in a loud growl with her hands folded.

Neeti who is shocked to see Pari behave this way with her accuses Vishal of creating distance between them and walks away from there with tears in her eyes.

Afterward, while Pari is apologizing to Neeti for yelling at her, Neeti notices Vishal hugging a random girl and getting into a car with her.

Neeti tells Pari that it was her mistake as she should not interfere in anyone's else personal matter and even asks Pari if she knows any of Rajeev's/Vishal's friends.

When Pari replies negatively, Neeti thinks Rajeev aka Vishal is a pro player and decides she will tell Pari the truth once she is sure of it.

Later, on one hand, Neeti feels upset seeing Pari's angry behavior towards her; on the other hand, Pari feels guilty for yelling at Neeti.

In the meantime, noticing Neeti's sulking mood, Rajeev calls Pari to know about it without Neeti's notice and Pari informs him about her beef with Neeti.

Once Neeti comes out of the washroom, Rajeev advises her not to get invested in Pari's life anymore and Neeti agrees.

Afterward, Rajeev and Neeti are sleeping in their room when Gurpreet knocks on the door thinking this is Pari's room and she wants to spend the whole night talking with her.

On one hand, Babli is trying to take Gurpreet away; on the other hand, Neeti asks Rajeev who is at the door in a sleepy voice which stresses Rajeev.