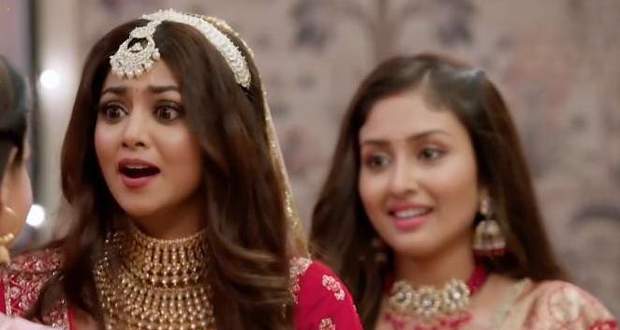 Today's Parineeti 24th June 2022 episode starts with the taxi drivers taking Neeti along inside a carpet.

Further, Gurpreet informs Sukhwinder that Neeti is not in her room but Neeti arrives at the Mandap.

Sanju thinks of his marriage rituals with Parineet as he repeats them with Neeti.

On the other hand, Parineet catches the taxi drivers taking a carpet with them but they escape after giving her an excuse.

Neeti stands from the Mandap calling out for Parineet while others stop her making Sanju tense.

Sanju hears Parineet's voice and is shocked to see her giving a hug to Neeti.

Parineet scolds Neeti for standing from the Mandap and asks her to sit back.

Sanju joins the dots and finds out that this was the job of the cultural consultant that Parineet was talking about.

Sanju gets teary-eyed as his own wife gives his hand away in Neeti's hand.

Further, the taxi drivers elope when they run into an accident and find out that the woman they kidnapped is not Neeti but someone else.

On the other hand, Sanju and Neeti stand up for the garland ceremony which reminds him of Parineet's sacrifices.

Sanju completes the garland ceremony he is in utmost guilt and shows signs of anxiety.

Sanju opens up his sehra which shocks everyone.

Parineet asks Rajeev about Sanju and seems to be confused.

Sanju confesses that he is Rajeev.

Sanju says that he liked Neeti before he even met Parineet and never revealed his true identity.

Neeti calls Sanju a cheater and a liar while Rajeev says that he cannot face himself and feels disgusted with himself.

Neeti slaps Sanju while Sukhwinder gets unconscious and Vikram pushes Sanju in anger.

The thud shifts Sanju out of his daydream and finds that he never confessed and it was all a dream.

On the other hand, the taxi drivers come back and plan on kidnapping Rajeev and Neeti.

Meanwhile, the Mandap is ruined by the kidnappers to disperse the guests so that they can kidnap Neeti.

Neeti and Sanju are taken to separate rooms while others clean the area.

Parineet walks towards Sanju's room to give him the coconut to protect him from bad luck while the kidnappers try to doze off Sanju with chloroform.

Further, the kidnappers hide and Pari finds Sanju in a troubled stage.