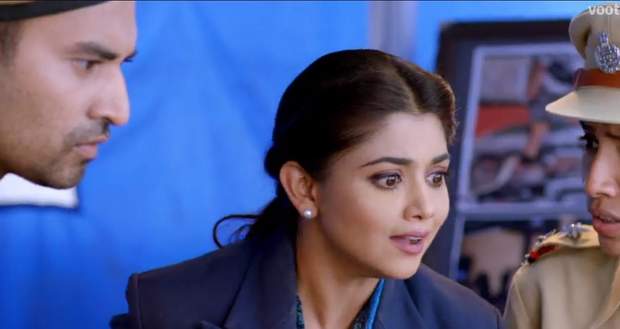 Today's Parineeti 24th May 2022 episode starts with Chandrika informing Parminder about the situation at the bank while Vikram successfully enters the bank.

Simmi seems to be impressed by Vikram and his bravery.

On the other hand, Monty distracts Pari while Rajeev hugs Neeti.

Meanwhile, the injured robber is healed by the doctor while inspector Kiran and Arjun get into a heated argument.

Later, the robber talks to inspector Kiran and demands gold.

Monty tries to take Pari in the wrong direction but gets caught by the lady robber.

On the other hand, Rajeev and Neeti get caught as well.

The head robber brings the jacket with explosives and plans on making Neeti, Pari and Rajeev wear it.

On the other hand, inspector Kiran tries to get to a middle point with Arjun and talks to him about a spy in their team.

Later, a media team is found recording the police team and gets caught.

On the other hand, Neeti gets an intuition to find Pari but Rajeev diverts her way and asks her to look somewhere else.

Further, Rajeev sees Parineet coming in his direction and closes the door on her face.

The robber tries to punch Pari while Vikram breaks his hand in response.

As soon as Vikram finds out about Rajeev hiding nearby, he knocks on his door while they get caught.

Scared to get caught, Sanju tries to come clean and tell the truth to Neeti.