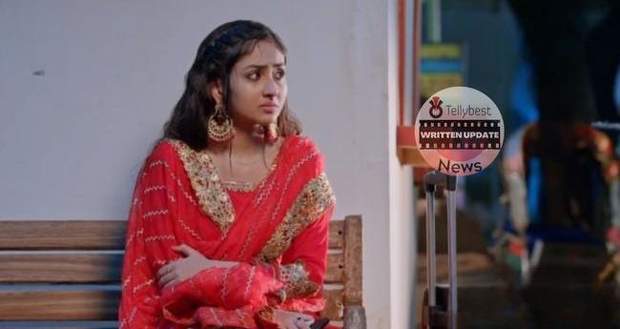 Today's Parineeti 24th October 2022 episode starts with Pari jumping out of the taxi with a deep breath.

The taxi driver stops his car and starts chasing Pari.

During the running, Pari throws some cupboards at the driver and the boxes hit the driver on the head.

She finds another driver nearby and begs him for help and the driver turns around.

The driver then starts touching Pari’s arm inappropriately and tells her in an evil voice that he will save her.

While Pari looks at him in shock, the driver grabs Pari forcefully and another one also arrives there.

The driver smiles at Pari’s kidnapper and he puts a piece of cloth on Pari’s mouth to prevent her from screaming.

The duo then throws Pari inside the car and starts driving so Pari’s kidnapper can marry her.

He even accuses Pari of revealing his secret in front of everyone and insults him.

Rajeev’s alter ego appears in front of him and accuses him of ruining Pari’s life.

The ego further calls Rajeev selfish while Rajeev stares at his ego in horror.

On the other hand, the driver stops the car in the middle of the road and informs his partner about getting four lakh after selling a girl.

Hearing this, Pari’s kidnapper’s eyes fall on Pari and he urges his partner to arrange a way to sell Pari as she is very pretty they will get more money for her.

While Pari is struggling in the car, her kidnapper gazes at her and starts smirking.

Elsewhere, Neeti wakes up from sleep and gets shocked to see Shalu’s missed calls but thinks she will call her in the morning.

Afterward, Neeti starts thinking about Pari and Rajeev and hopes that Rajeev is treating Pari better.

She also tells herself that if Rajeev cheats on Pari again she will teach him a lesson.

Rajeev even adds that he tried to find a fault in Pari’s character but he failed.

On the other hand, Gurpreet is telling Harman that she just wants her Pari to be back early while Mandeep thinks Pari will increase problems in her household.

She even blames Pari as she thinks Rajeev has cheated on Pari because she is very annoying.

Meanwhile, Monty tells Rajeev that he has started liking Pari.

© Copyright tellybest.com, 2022, 2023. All Rights Reserved. Unauthorized use and/or duplication of any material from tellybest.com without written permission is strictly prohibited.
Cached Saved on: Monday 21st of November 2022 03:42:00 AMCached Disp on: Tuesday 29th of November 2022 10:46:54 AM