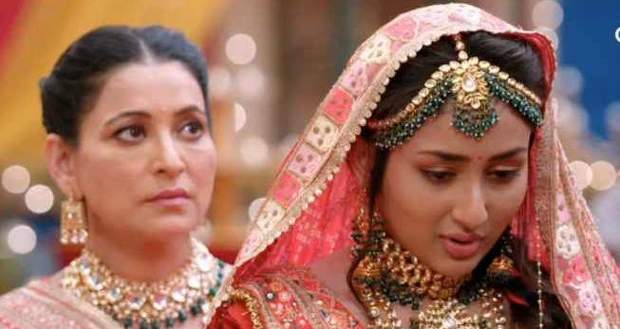 Later, Neeti has a fight with Pari about agreeing to seek proposals and dragging Neeti with her.

While expressing her annoyance, Neeti explains to Pari that for her, getting married is equivalent to getting her wings clipped and she is not ready to give up her dreams for anyone.

Hearing Neeti, Pari advises Neeti to marry someone who will help her in accomplishing her dreams.

Knowing that Raj couldn't find his 'dream girl' his mother informs him about sending Pari’s Proposal.

At Jaswant’s house, Mandeep asks Kavita for the boy's picture and immediately recognizes Raj from another night.

Seeing Raj’s picture solidifies Mandeep's suspicions and she plans to take revenge on being fooled by both mother and daughter.

Alone in her room, Pari is thinking of Raj and desperately hopes for Raj to be her husband.

Meanwhile, Mandeep manipulates Kavita for not showing Raj’s pic in particular to Jaswant.

Hearing about rejection from Pari’s family, Raj’s mother gets angry and asks Kavita to take Raj’s proposal for Neeti.

After hearing about Neeti’s proposal, Pari rushes to inform Vikram about it.

However, Vikram assures Pari to not worry about his matter as Neeti will not get caught so easily.

However, Neeti asks her mother to seek Pari's agreement first, and then only she will meet the boy and his family.

Pari, however, could not check the message as her mother arrives to take her to meet the guests.