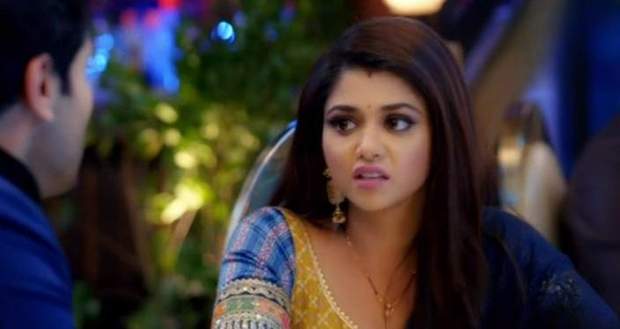 Today's Parineeti 25th July 2022 episode starts with Rajeev asking Praineet if she is doubting him.

He then introduces her to some strangers and asks them if they know Mr. Mehta.

Before the couple can answer, Rajeev takes Parineet to a different place and narrators a fake story of a colleague and his new wife Suhana.

Hearing Rajeev’s words, Parineet calls herself stupid for not trusting him.

She even says sorry to Rajeev for it and offers her orange juice.

Seeing a waiter, Rajeev decides to make him throw some juice at him but his plan fails as the waiter spills the juice on Parineet.

Parineet then goes to clean herself in a washroom much to Rajeev’s shock.

As per him, Neeti and Parinnet will be in the same washroom and his plan is ruined permanently.

On one hand, Parineet curses herself for not trusting Rajeev, and on the other hand, Neeti is sure Rajeev is hiding his problems from her.

At the same time, Parineet and Neeti both try to open the door so as excepted the door does not open.

Rajeev however grabs Parineet and drags her to another washroom much to Parineet’s shock.

Once inside, turning to Parineet Rajeev apologizes to her for spilling the juice on her.

Hearing his apology, Parineet once again curses herself for doubting Rajeev.

Cleaning herself, Parineet decides to leave but Rajeev behaves like a caring husband.

Elsewhere in another bathroom, Neeti helps a woman with her baby.

Listening to the woman’s story, Neeti decides to call Parineet to check on her.

Seeing Neeti’s name, Rajeev quickly cages Parineet between his hands and starts complimenting her for her beauty.

Parineet who is confused to see this sudden change in Rajeev asks her if he is doing this so she cannot take Neeti's call.

Though Rajeev denies it, in his mind, he breathes a sigh of relief.

Meanwhile, Neeti is confused as she feels like she heard the ringtone nearby. She decides to check but is interrupted by a waiter.