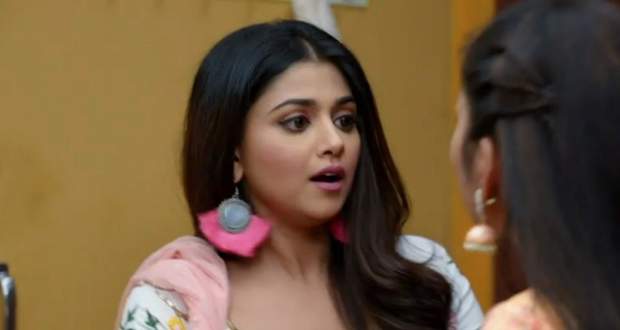 Today's Parineeti 26th April 2022 episode starts with Rajeev trying to see the face of Neeti's friend while he thinks of Monty's advice.

Meanwhile, an elderly man calls Sanju and takes him into his apartment.

On the other hand, Mandeep thinks of a plan to escape the situation of going to Chandigarh and adds adulteration to Gurpreet's tea.

Meanwhile, Neeti tries to lure the taxi driver to get the cash for his payment while he waits to shoot his shot at Neeti.

Later, Gurpreet reflects on the signs of the medicine Mandeep added to her tea while Mandeep insists she visit a doctor.

The family reverts back to Barnala and Mandeep's plan gets successful.

Meanwhile, Neeti receives a call from the taxi driver where she confirms him to arrive at her apartment.

As the taxi driver arrives at her apartment, he sees Pari and Neeti with a broom and pepper powder.

On the other hand, the shameless driver sits on the couch and seems fearless.

Meanwhile, Neeti orders Parineet to slap while he holds her hand and tries to defend himself.

Neeti hits the driver with the vase and knife while he runs towards the door.

Later, Rajeev arrives at the door while the driver is stunned.

The driver runs towards the room and gets beaten up by (Sanju) Rajeev.

As Sanju is beating the taxi driver, Parineet tries to stop Sanju and knocks on the door.

Later, the taxi driver pleads for forgiveness while he escapes the apartment, locking Rajeev inside the room.

On the other hand, the doctor suggests Gurpreet take a rest and drop the plan to travel anywhere far as it can affect her health.

Mandeep is relieved after hearing the news of not visiting Parineet at Chandigarh.

Meanwhile, Neeti beats the driver with the curtain rod and asks Pari to bring the rope.

Pari brings the rope and overhears Sanju as he is locked behind the door.

Parineet talks to Sanju and informs him that Neeti is safe and he needs not worry about her.

Later, Parineet thanks Sanju for helping her out to save them from the driver.