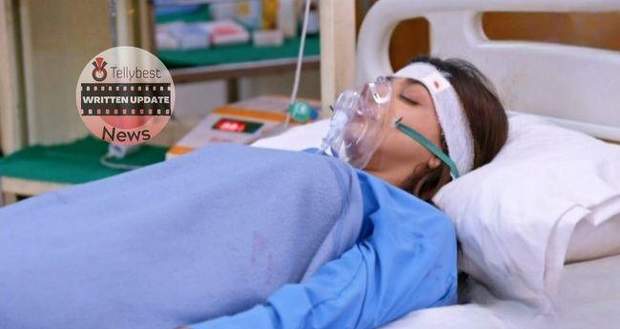 Today's Parineeti 26th August 2022 episode starts with Rajeev driving in his car and telling himself that he will announce his love for Neeti to the world.

Meanwhile, at the police station, a lady constable finds a drug packet in Pari’s bag.

Pari tries to explain to the police officer that someone must have slipped the drug inside Pari’s bag.

She even urges the police officer to take action against Neeti’s murderer but the police order her to stay quiet.

The police officer then urges Pari to reveal the name of the drug dealer.

Hearing this, Pari once again urges the police to let her go since Neeti is alone in the hospital.

At the same time, Harman also arrives there and informs the police that Pari cannot sell drugs.

Simmy who is there also overhears it and decides to inform Parminder.

Elsewhere in the hospital, Rakesh and Shera order the sweeper to push Neeti’s stretcher to the stairs.

The sweeper agrees and walks away.

While roaming in the hallway, Mandeep finds Shera and Rakesh together and starts accusing them of ruining Pari’s life.

Irritated by Mandeep’s allegations, Rakesh kidnaps her and puts her in his car.

Elsewhere at the police station, Chandrika arrives and bells Pari out of there.

She then urges Pari to be with Neeti in the hospital.

After arriving at the hospital, a nurse orders Pari to bring some medicines for Neeti.

Hearing this, Harman urges Pari to go to Neeti while he brings the medicine.

Meanwhile, in the hospital, the doctor informs Rajeev that they need to perform immediate surgery on Neeti.

Hearing this, Rajeev begs them to save Neeti at any cost.

At the same time, Pari arrives near the operation room.

She is shocked to hear Rajeev calling Neeti his wife.

However, the doctor informs Rajeev that Neeti has lost so much blood.

Hearing this, Rajeev starts to act like a mad person as he cannot believe his Neeti is leaving him.

Pari who is overwhelmed by this revelation sinks to the floor crying.