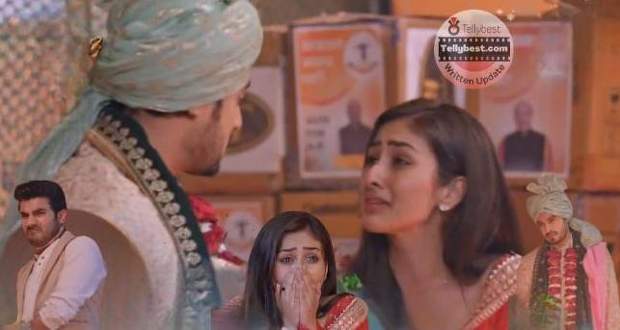 Today's Parineeti 26th December 2022 episode starts with Neeti and Rajeev arriving at the police station to lodge a complaint against Rakesh.

However, the inspector says they cannot file a complaint yet as it has not been even 24 hours since their friend disappeared.

Neeti says that the inspector is just making up lies as he does not want to lodge an FIR against Rakesh and the MLA.

The inspector asks them why they did not file a complaint that that moment when they spotted Rakesh in their house.

Rajeev tries to explain that he and Rakesh got into a fight after which he escaped from there and Rajeev did not want to bother his family.

As the inspector does not change his decision, Neeti takes out her phone and starts to record him while asking him questions.

The inspector gets angry at Neeti and commands the constables to put Neeti in jail after snatching away her phone.

Rajeev requests the inspector to release Neeti but he says that she should have behaved from the start.

Neeti says that she will show the inspector his place but Rajeev asks her to shut up as her attitude is costing them heavy damage.

Rajeev says that Neeti always acts impulsive and does not think about the consequences at all.

Asking Neeti to sit quietly inside the lockup, Rajeev refuses to give his phone to her.

Meanwhile, Pari begs Rakesh to let go of her as she is already married and does not want to marry him.

Rakesh says that the marriage will happen at any cost, even if it means that Pari has to take the marriage rounds after getting physically disabled.

Pari shudders in fear while Rakesh asks her to obey his commands without any question.

Rakesh asks his men to keep their eyes on Pari while he changes his attire for the marriage.

The MLA calls Rakesh and asks him to release Pari before the media discovers the truth but Rakesh refuses to follow his command.

The MLA tells his wife that he will kill Rakesh himself if his reputation gets harmed due to his actions.

Meanwhile, Neeti convinces Rajeev to give her his phone and calls her friend in the media asking him to help them.

Rakesh returns and gets nervous seeing Pari missing and starts searching for her in the party office.

Pari silently waits for the perfect opportunity and locks Rajeev inside a room.

Gurinder calls Rakesh asking him where he is with Pari and requests him to stay away from Rajeev and Neeti.

Neeti tells Rajeev that he should go to the party office as Rakesh must have taken Pari there.

© Copyright tellybest.com, 2022, 2023. All Rights Reserved. Unauthorized use and/or duplication of any material from tellybest.com without written permission is strictly prohibited.
Cached Saved on: Wednesday 25th of January 2023 12:58:57 PMCached Disp on: Sunday 5th of February 2023 03:46:07 AM