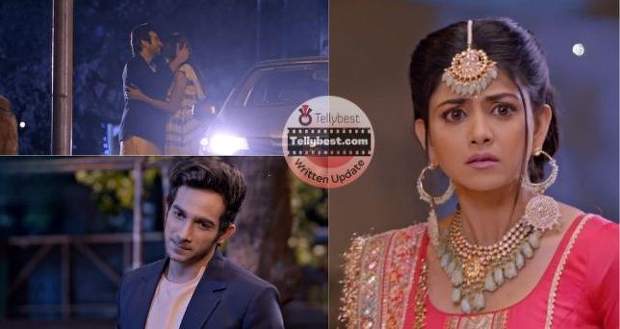 Today's Parineeti 26th January 2023 episode starts with Vishal walking out of the store with his girlfriend in such a hurry that the girl looks at him with confusion.

Putting the girl inside his car, Vishal mentions that he is very excited to marry her so he is just nervous while Neeti is running behind the vehicle.

As Neeeti loses Vishal’s sight, she runs back into the store to get the address but the shopkeeper refuses to leak the customer’s address.

Meanwhile, Pari and Gurpreet are eating street food and after they are done, Pari pays the street stall owner and forgets her phone there.

In the meantime, Neeti pleads with the shopkeeper for the address by saying that she is their regular customer but the shopkeeper does not change his mind.

Neeti then stubbornly decides that she single-handedly will stop this marriage without telling Pari as Pari is blind to Rajeev’s love.

On the other hand, Biji feels relaxed when Babli gives her a shoulder massage and urges Babli to marry Monty so she can live here permanently.

Hearing this, Babli feels upset as Pari has made this family happy, but Pari is suffering.

Meanwhile, Neeti overhears the delivery man saying that he will deliver the sherwani to Vishal’s place and she decides she will follow him.

She even tries to call Pari but gets upset as Pari is not picking up her call.

While Neeti is circling in the street as the delivery man has yet not left and she is getting impatient whereas Pari goes to find her phone after she realizes that she has lost it.

Gurpreet is sitting near a stall when she finds Neeti across the street and calls out to her.

When Neeti asks Gurpreet why Pari is not taking her call, Gurpreet tells her that Pari has lost her phone.

This makes Neeti even more worried and she runs away from there as she notices the delivery man leaving Gurpreet confused.

Gurpreet stands there muttering that she cannot understand why Neeti is living in Pari's in-laws' home for a long time and Pari arrives there with a sad face to inform Gurpreet that she did not find her phone.

When Gurpreet reminds Pari about the street food stall, Pari runs to check.

Back in Bajwa's house, Biji scolds Gurinder and Simmy both for behaving rudely in front of Pari's mom which makes Gurinder mutter inside her heart that when Biji will learn about Pari's truth, she will hate her.

During the following, Neeti gets more agitated as Rajeev has gone to Bengaluru and Pari is not picking up her call whereas Pari finds her phone wet in a stall due to which it is not working properly.

Later, when Neeti arrives at the wedding venue, she is informed by the guards that she is not allowed while Vishal recalls how he ordered the guards to keep Neeti away from his marriage.

He even mutters to himself that if his bride learns about him healing his friend to keep two wives, his marriage will surely be broken.

© Copyright tellybest.com, 2022, 2023. All Rights Reserved. Unauthorized use and/or duplication of any material from tellybest.com without written permission is strictly prohibited.
Cached Saved on: Thursday 26th of January 2023 11:58:07 PMCached Disp on: Sunday 5th of February 2023 04:24:52 AM