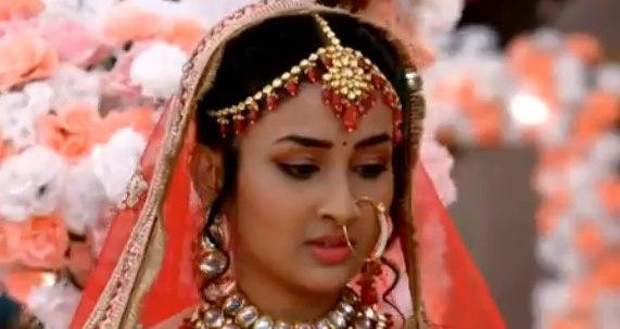 Today's Parineeti 26th March 2022 episode starts with Parineet and Rajeev proceeding with the rituals of the marriage with their families showering blessings on them.

Meanwhile, Dharamraj brings back Rakesh with him while cursing at him for causing trouble at Parineet’s house.

Rakesh keeps silent while his father urges him to leave Parineet and move on with another girl instead of playing the villain.

Jijaji calms Dharamraj somehow and they exit from the room with Rakesh inside alone.

As Dharamraj gets a call informing him about the blunder Rakesh has caused, he bangs the door furiously while Rakesh puts rope on his neck.

Rakesh attempts suicide but gets saved by Dharamraj and his men who enter the room at the right moment.

Seeing Rakesh like that, Jijaji proposes a plan to him about arresting Rajeev by accusing him of false charges and placing Rakesh in his place.

On the other hand, Rajeev and Parineet complete their wedding with the Mangalsutra and Sindoor and take blessings from the elders.

Just at that moment, Rakesh, Dharamraj, Jijaji, and other police officers enter there and accuse Rajeev of trying to kill Rakesh.

Parineet’s family blames Dharamraj and his dirty tricks to which Dharamraj tells the police a manipulating recap of the past.

Rakesh interrupts after him and announces that he and Parineet are in love with each other while her family is forcefully getting her married to Rajeev.

Parineet and her family deny the allegations but get shunned by Rakesh’s claim that Parineet knew it was him behind the veil as the bridegroom.

Rajeev asks Parineet to say for herself and tells her that he believes in her when she doubts herself.

Standing with Parineet, Rajeev announces that he will always support Parineet as she is his wife now.