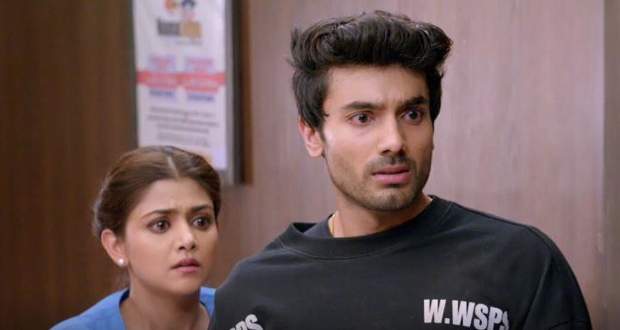 Today's Parineeti 26th May 2022 episode starts with Neeti planning to escape from the arrest while Rajeev thanks Monty for not letting him spill his secret.

Later, Rajeev feels grateful for Neeti as she taught him the importance of being independent.

Rajeev shares with Monty that he will immediately marry Neeti after escaping from the bank as life is unpredictable.

On the other hand, Akki decides to send Rajeev, Neeti, and the doctor to get gold from the outside.

Later, the police expose Akki about his plan with his bank manager brother but Akki tries to overpower them.

Officer Kiran informs that Akki's brother Mukesh is in their custody and should calm down and behave.

Finally, the police officers bring the robbers to a middle ground and they agree to send their hostages.

Neeti and Rajeev are taken to wear the explosive jacket along with the doctor.

Akki feels defeated and orders to bring Parineet to his gunpoint which will force Rajeev to come back.

Meanwhile, Chandrika and Simmi quarrel while Simmi looks for Vikram.

Rajeev is made to wear the jacket and Akki warns him about Parineet.

Later, the Doctor escapes from the rope hanging outside while the police plan to attack the bank.

Meanwhile, Rajeev tries to stop them and suggests police should wait for five minutes as he has to save Parineeti as well.

Later, Neeti and Sanju take the gold with them to the bank premises.

On the other hand, Rajeev is worried about his truth being exposed as Neeti and Pari are just a few steps away.