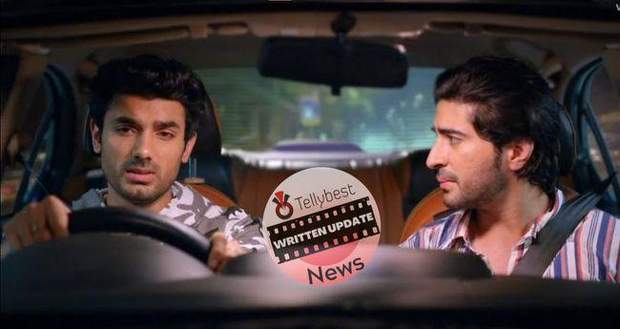 When Rajeev is about to lift the cover-up from the stretcher, the light goes out and he starts imagining Pari in front of him.

Seeing Pari, Rajeev again starts begging her for forgiveness with tears in his eyes while Pari lashes out at him for breaking her heart.

In Bajwa’s house, Chandrika and Amit get into an argument about Gurinder.

She even announces that she will leave the house and starts blaming Gurinder for Pari’s death.

On the other hand, in the hospital, Rajeev sits down with Monty on a nearby bench and starts telling him that he needs to find Pari at any cost.

Hearing this, Monty starts consoling Rajeev by announcing that Pari will be all right.

At the same time, Rajeev gets a call from a nurse who urges him to come to Neeti’s room with some medicines.

When Rajeev enters the room, he inquires the nurse about Neeti’s health and the nurse advises him to stay with Neeti as she is having panic attacks.

Hearing this, Rajeev nods and comes out of the room.

Afterward, Rajeev urges Monty to stay with Neeti while he goes in search of Pari.

Hearing this, Monty asks Rajeev if he feels something for Pari too but Rajeev denies it.

After Rajeev walks away, Monty starts thinking that Rajeev indeed has feelings for Pari whether he accepts it or not.

In the meantime, in Bajwa’s house, angry Parminder decides to make Gurinder leave her house.

Hearing this, Tayaji tries his best to change Parminder’s mind but she ignores it.

After that, Parminder gathers everyone in the hall and orders Gurinder to leave the house.

Hearing this, everyone along with Gurinder tries to calm Parminder down by advising her to think straight before taking any decision.

However, Parminder grabs Gurinder’s hand and throws her out of the house.

Elsewhere while driving, Rajeev starts questioning himself for caring for Pari.

He then stops the car and breaks down on the street in tears.

Meanwhile, in Bajwa’s house, Amit gets a call and runs to open the door.

As soon as Amit opens the door, Gurinder enters the house like thunder and she starts blaming Parminder by announcing that Parminder is partially responsible for ruining Pari’s life.

She even adds that Parminder never give her money so that’s why she was forced to sacrifice Rajeev’s life.

Hearing this, Parminder gets silent while Tayaji tries his best to calm Gurinder down by reminding her of the values of the family but Gurinder refuses to listen.

She then brings a pencil and decides to draw the line to separate the house while everyone looks at her with shock.

Seeing this, Chandrika calls Rajeev and urges him to come quickly.

Hearing this, Rajeev arrives home and orders Gurinder to stop.