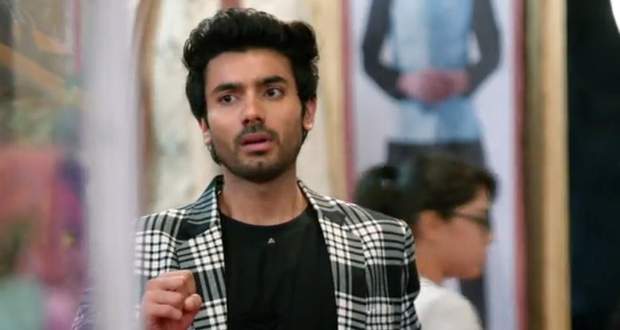 Later, Neeti provokes Pari to slap the taxi driver and take revenge on him as he was the reason behind her losing Rajeev's address.

Parineet slaps the taxi driver continuously and blasts at him while she acquires the avatar of a tigress, teaching him a lesson.

Later, Rajeev calls the guy from the top floor who helps him to unlock his jammed door.

Meanwhile, Neeti records the taxi driver's confession on her cellphone to file a complaint against him.

Parineet cries thinking of how selfless and caring her friend Neeti is and stands by her side no matter what.

Later, the police arrive at Neeti's apartment while Pari gets emotional and locks herself in the bathroom.

Neeti sends Sanju to call her from the room to file the complaint while he finds her crying in the bathroom.

Later, Sanju consoles Parineet through the door and says she should be brave and be thankful for such a caring friend as Neeti.

On the other hand, Gurpreet knocks on Gurinder's door leaving her in shock.

Gurpreet asks about Parineet and Gurinder is speechless and shocked while Parminder reveals that Parineet is not in Chandigarh.

Meanwhile, Gurinder tries to change the topic and calls Rajeev.

Gurpreet is adamant and confronts Gurinder if she is hiding something from her.

On the other hand, the taxi driver skims out of the police grip and Rajeev follows him catching him back.

Later Rajeev calls Neeti outside the door and hugs her tightly, Rajeev expresses his love and cares towards her.

Heated up after discovering that Parineet is living with Rajeev, Gurinder calls Rajeev and scolds him.

Rajeev denies Parineet staying with him and says he doesn't care as Chandigarh is a big city.

Later, Rajeev says he loves someone else and he is not free for a useless topic like Parineet.

Meanwhile, Gurpreet arrives and gets the phone from Gurinder's hand, and tries to talk to him but fails.

Later, Gurinder thinks of eloping the village before her truth comes out.

Rajeev asks Neeti to take care of herself as she could have been in serious danger because of it.

Neeti says she can do anything for her friend Pari as she is innocent and needs her protection.

Later, Rajeev asks Neeti to marry him as he is getting anxious and is scared to lose her.

Neeti says they will get married after the engagement and wants a beautiful traditional wedding.