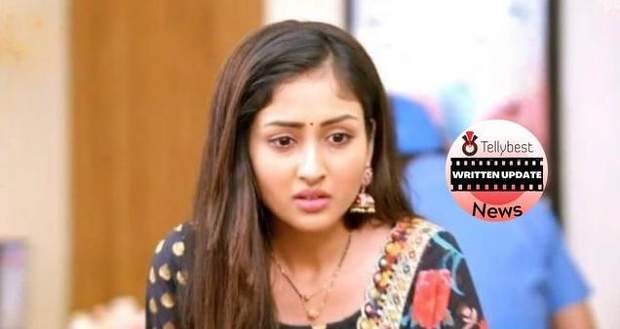 Today's Parineeti 27th August 2022 episode starts with the summary of the serial as the show will be telecast from Monday to Friday from now on.

So far in the story, Neeti asks Sanju to go to Amritsar with her.

Due to Parminder's anniversary, Rajeev denies it as he can't ditch his family.

However, Neeti urges Rajeev, and they get into an argument.

During the argument, Rajeev informs Neeti that if she continues to act stubbornly, then their marriage will fail.

As expected, this statement saddens Neeti.

She is in charge to organize Parminder's anniversary.

On the other hand, Neeti notices Rakesh's car on the road.

Worried Neeti then quickly calls Pari to inform her about Rakesh.

During the call, Neeti urges Pari to stay inside her home as Rakesh will try to harm her.

Hearing this, Pari tells Neeti to relax as she will be careful.

After Pari cuts the call, Neeti follows Rakesh's car to Rajeev's house and threatens him to stay away from Pari otherwise she will send Rskesh's video clip to the media.

As per Rakesh's order, Shera kidnaps Neeti from her house despite Neeti's struggle.

Neeti tries to call Rajeev and Pari but both numbers are busy.

Elsewhere in the market, Rakesh starts following Pari like a creepy person.

Pari somehow escapes Rakesh by throwing some chili powder at him and getting into a cab.

Though Rajeev comes out of his car, he fails to see Neeti.

Meanwhile, Neeti escapes Shera while he goes for a nature call.

While Pari is looking through Neeti's home for Neeti, Neeti calls her.

Before Neeti can say anything, she gets hit by a car.

Though Pari takes Neeti to the hospital, Neeti has lost so much blood.

However, Rakesh tries to kill Neeti several times but fails.

In the meantime, desperate Pari calls Sanju several times but he does not pick up.

However, Sanju learns about Neeti's accident from the police when he goes to register Pari's missing report.

Later Pari goes to inform the police about Rakesh but they accuse her of being a drug dealer.

However, Harman and Chandrika bail Pari.

Later in the hospital, Pari witnesses Rajeev acting like a mad person for Neeti and learns that Sanju and Rajeev are the same.

© Copyright tellybest.com, 2020, 2021. All Rights Reserved. Unauthorized use and/or duplication of any material from tellybest.com without written permission is strictly prohibited.
Cached Saved on: Sunday 2nd of October 2022 09:50:12 AMCached Disp on: Wednesday 5th of October 2022 05:30:49 PM