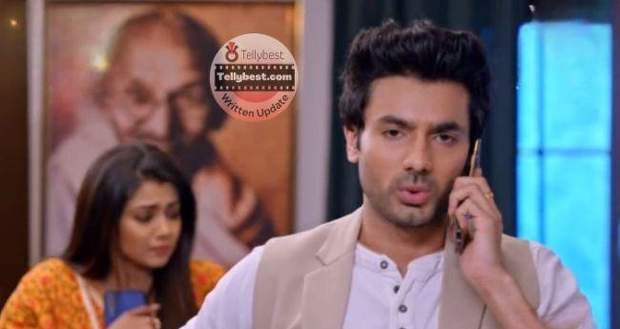 Today's Parineeti 27th December 2022 episode starts with Parminder asking Gurinder with whom she is talking.

In reply, agitated Gurinder reminds Parminder that Parminder should not care about her or Rajeev.

Gurinder shuts her room door after muttering that she and Rajeev are staying in this Bajwa house only because they have no other option.

Meanwhile, at the police station, Neeti orders Rajeev to bring Pari back safely as Pari is in a huge problem but Rajeev questions her if she will be okay.

Neeti reminds Rajeev that she is safe in jail but Pari is in big trouble and Rajeev praises Neeti for being brave.

In the meantime, during the car drive, Rajeev tells himself that he feels a strange connection with Pari while recalling his memories with Pari.

He even clarifies to himself that he knows it is not love but he feels the need to save Pari at any cost.

Meanwhile, Pari successfully runs away from the party office, and when she reaches a safe distance, she takes a deep breath.

Pari then tries to call Neeti but she does not pick up causing Pari to get stressed.

Noticing a stranger in front of her, Pari begs him to help her but when the stranger turns, she gets shocked to find Rakesh’s friend.

Rakesh’s friend orders Pari to marry Rakesh since he loves her very much in a sweet voice but Pari calls Rakesh creepy for liking a married girl.

This angers Rakesh’s friend and Rakesh also arrives there to drag Pari back to the party office despite Pari’s protest.

Later, during the drive, Rajeev gets a call from Gurinder who orders him to take care of Neeti, not Pari.

Hearing this, Rajeev gets angry and cuts the call after telling Gurinder that Neeti will never be happy if Pari does not return.

Once the call cuts, Gurinder curses herself for getting her son in trouble and gets stressed as she realizes that if Rakesh reveals to Rajeev her involvement in Pari, Rajeev will get angry at her.

Later, on the one hand, Rakesh is doing marriage rituals with Pari by force; on the other hand, Rajeev is looking around the party office for clues.

Rajeev is about to leave when he finds Pari's bracelet on the floor and realizes Pari must be in the party office.

On the other hand, at the police station, Neeti's friend bells Neeti out and informs Neeti that he has called the media so the news reporters will come here at any time.

When Neeti goes out of the police station, she finds the police officer who is busy talking to Rakesh's father.

Neeti who has overheard the conversation starts recording the police officer making him uncomfortable.

Meanwhile, Rakesh orders Pari to do pheras with him and a flashback show Rakesh changing his plan after getting the call from Gurinder.

Meanwhile, Rajeev is looking through the party office to find Rakesh and Pari.

© Copyright tellybest.com, 2022, 2023. All Rights Reserved. Unauthorized use and/or duplication of any material from tellybest.com without written permission is strictly prohibited.
Cached Saved on: Wednesday 25th of January 2023 01:30:03 PMCached Disp on: Sunday 5th of February 2023 02:53:41 AM