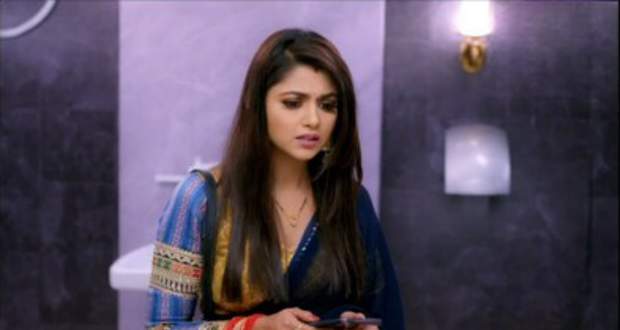 During the call, Parineet tells Neeti about how she was delusional about Rajeev’s cheating.

Hearing this, Neeti tries to pursue Parineet that Rajeev must be acting towards her.

Instead of answering, Parineet asks Neeti about her first night with Sanju.

This statement makes Neeti blush and she starts gushing over Sanju’s character.

Neeti then asks Parineet about her location and Parineet happily tells her.

Later while Parineet is busy distributing prasad to the beggars, Neeti surprises her at the temple.

Neeti then takes Parineet to the Matarani idol and urges her to put her hand on top of the lighted lamp so she will tell her everything honestly.

However, Parineet tells Neeti that there is no need for this as she never hides anything from Neeti.

She then narrates the story of Rajeev’s meeting with his colleague’s wife and spending time with her.

Unconvinced with the story, Neeti suggests to Pari that Rajeev must be lying but Pari refuses to believe.

She even tries to walk away but Neeti stops her.

Seeing Parineet’s teary eyes, Neeti urges her to bring back her old self who knew how to deal with dishonest people.

She even compares Pari with Draupadi.

This statement awakens anger inside Parineet and she announces that if she finds Rajeev’s girlfriend then she will punish her hard.

Parineet then goes to Matranai’s idol and swears that if Rajeev is guilty then she will teach him a lesson while putting her hand on top of a lighted lamp.

Afterward, Parineet leaves the temple while Neeti watches her proudly.

Later Parineet receives a call from her Planer crew who orders her to return to work.

Thinking about Sanju, she texts him.

While texting Neeti, Rajeev notices a car following him.

Rajeev comes out of his car and he meets Naman, his old friend.

Naman then introduces Rajeev to his girlfriend and asks him if he is married or not.

However, nervous Rajeev replies yes and Naman invites him to his marriage with his wife.

© Copyright tellybest.com, 2022, 2023. All Rights Reserved. Unauthorized use and/or duplication of any material from tellybest.com without written permission is strictly prohibited.
Cached Saved on: Monday 21st of November 2022 02:17:15 AMCached Disp on: Thursday 8th of December 2022 02:33:12 AM