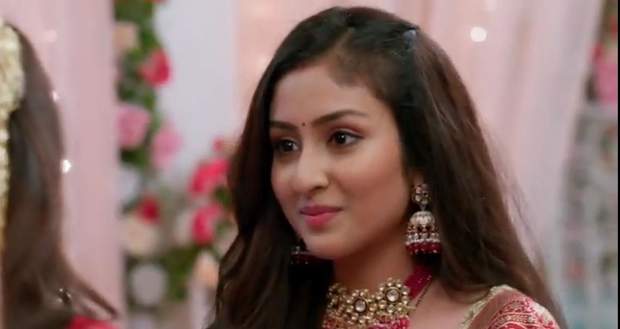 Today's Parineeti 27th June 2022 episode starts with Neeti being kidnapped by the taxi drivers and Sanju lying unconscious on the floor.

The taxi driver plans on asking for ransom in exchange for Sanju and Neeti and spoiling their faces.

Further, Vikram and Parineet find Neeti while Vikram fights with the taxi drivers to free Sanju.

After some time, Parineet opens up Neeti's locked room and Neeti hugs Parineet while crying.

Later, the taxi driver holds Vikram and says he will take Parineet with him and marry her.

Vikram gets angry and fights with the kidnappers while Sanju gains consciousness and finds Pari in front of his eyes.

Further, the kidnappers drag Parineet, Neeti, and Sanju in front of the family members and ask for their jewelry.

On the other hand, Sanju thinks of opening his Sehra and teaching him a lesson as the kidnapper talks about making Parineet his wife.

Neeti says that they love Parineet and can give their life for her while Rajeev thinks that Neeti is right as this feeling depicts love for Parineet.

Further, Gurpreet and other guests take off their jewelry while one kidnapper tries to snatch Parineet's ring given by her Bauji.

Sanju frees himself and beats the kidnapper continuously and is later joined by Harman and Vikram.

Further, Gurpreet beats the kidnapper with her slipper and is joined by Neeti as well.

All the members beat the kidnappers profusely while Rajeev gets back Parineet's ring.

Vikram notices Sanju hiding his face again even in an intense situation like robbery and asks him the reason behind it while he gets diverted by the kidnapper.

Further, the police arrive and arrest the kidnappers while Vikram asks him to remove his Sehra but the priest says he can reveal his face.

As Sanju is about to remove his Sehra Gurpreet stops him which makes Sanju feel relieved.

Further, Gurpreet, Harman, and Vikram leave for the police station while Pari and Neeti leave to get ready for the wedding.

© Copyright tellybest.com, 2020, 2021. All Rights Reserved. Unauthorized use and/or duplication of any material from tellybest.com without written permission is strictly prohibited.
Cached Saved on: Wednesday 27th of July 2022 10:14:12 PMCached Disp on: Thursday 11th of August 2022 11:25:48 PM