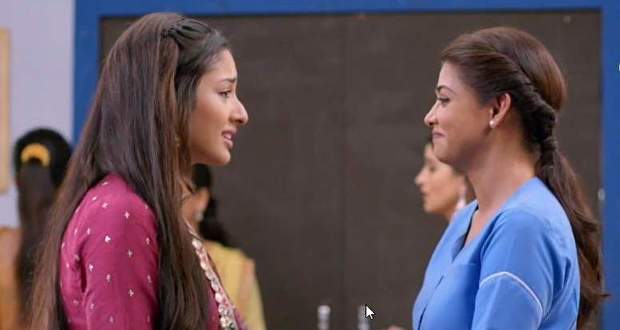 Today's Parineeti 27th May 2022 episode starts with Rajeev, Parineet, and Neeti's faces being covered by the robbers.

Meanwhile, the robbers demand a helicopter from the police and plan on blackmailing the police officers by keeping the hostages at gunpoint.

On the other hand, the robbers hear the footsteps of the police arriving and try to protect themselves by using Pari, Neeti, and Rajeev as bait.

Meanwhile, Vikram plans on blowing the sand in the robber's eyes while Parminder arrives at the bank worrying for her children.

The robbers line up the hostages at the front gate and get ready to escape from the backdoor.

Vikram uses his wit by directing everyone to the left side and the police enter the bank resulting in a gunfight between the robbers and the police.

The hostages take over the robbers and beat them while Rajeev gets worried about getting caught.

Further, Rajeev escapes attending a call after meeting Parminder while Neeti sits in the police jeep and leaves to give her statement.

Later, Parineet, Monty, and Rajeev reunite and leave for Bajwa house after they meet Parminder.

At last, the robbers get caught and police officer Arjun appreciates Kiran's wit in solving the case so effortlessly.

Later, Simmi tries not to show that she is impressed by Vikram's bravery and taunts him indirectly.

Parineet applies ointment to Rajeev while she expresses care for her husband.

Further, Rajeev, on the other hand, feels bad for Parineet, thinking highly of him.