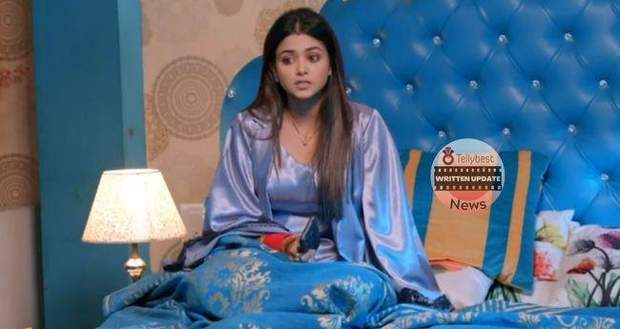 However, due to a bad network, the police officer is not able to hear her and yells at his constables for not repairing the telephone.

Pari continuously questions if the police officer can hear her but feels disappointed when the call cuts.

Afterward, Pari lies to the guards that she needs to use the washroom while she wonders about calling her family.

The guards doubt Pari and ask her if she has planned something.

Meanwhile, in Bajwa’s house, Neeti decides to do yoga as she does not want to gain fat after pregnancy.

She yells at sleeping Rajeev for not taking full care of his pregnant wife.

Picking up some of Rajeev’s clothes, Neeti walks to the washroom to change.

After Neeti walks away, Rajeev groans in his sleep and orders Pari to keep his work clothes ready.

Rajeev then wakes up from his sleep and thinks that he has gotten used to Pari being around.

Before he can dwell on his thoughts, Neeti comes out of the washroom and orders him to do yoga with her.

She further announces that she will post it online and it will get a lot of views and likes.

Rajeev starts grinning and calls Neeti a crazy person for thinking like this.

He then reminds Neeti that if she wants to win everyone’s heart in the Bajwa family then she needs to take care of them.

Realizing this, Neeti thanks Rajeev for reminding her and runs to the kitchen to make breakfast in the gym costume.

Chandrika looks at Neeti’s clothes and questions her why she is wearing these kinds of clothes in front of everyone.

Neeti informs her that she was doing Yoga but Chandrika scoffs and walks away.

Parminder along with other family members arrives at the breakfast table and Neeti serves Parminder her tea.

Looking at the tea, Parminder orders Chandrika to serve her instead of Neeti.

She then rudely announces that Neeti has no sense of how to dress in front of her in-laws which hurts Neeti and she runs away in tears.

Gurinder arrives there at the same time and informs Parminder that Neeti is an air hostess so she does not need to learn household chores and Chandrika is here for it.

Parminder gets angry and yells at Rajeev that he will soon realize about Pari’s importance.

She further adds that the guilt will create distance between Neeti and his marriage.

Rajeev gets angry and screams that he will live with guilt but he cannot upset Neeti.

Later while Neeti is sobbing about Parminder's behavior, Rajeev arrives there and consoles her.

He even reminds her that she needs to learn Pari's patience and Neeti agrees.

© Copyright tellybest.com, 2022, 2023. All Rights Reserved. Unauthorized use and/or duplication of any material from tellybest.com without written permission is strictly prohibited.
Cached Saved on: Monday 21st of November 2022 05:19:55 AMCached Disp on: Tuesday 29th of November 2022 12:00:15 AM