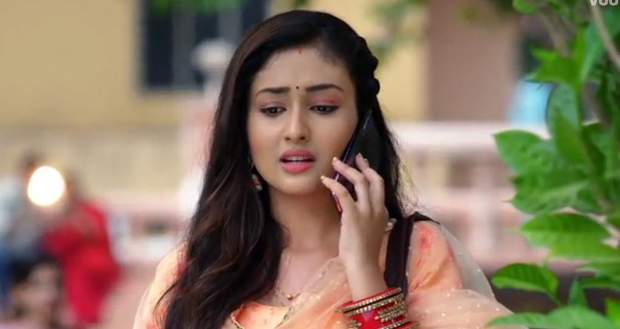 Today's Parineeti 28th April 2022 episode starts with Neeti teasing Rajeev as he got possessive of her after the taxi driver incident.

Neeti says Sanju should talk to Parineet while he hides his face and runs upstairs as he was too shy to meet Neeti's friend.

On the other hand, Parineet hands over Neeti's ring while Neeti says if Pari likes it she should try wearing the ring.

Co-incidence of the engagement ring

As Parineet tries the ring, it gets stuck on her finger but Neeti says she should keep it as it looks pretty in her hand.

Meanwhile, Neeti calls Sanju as she forgot to book the priest for her engagement.

Sanju says she need not worry as all of the arrangements are managed by him already.

Later, Neeti expresses her love for Sanju and says I love you to Sanju while she blushes.

Meanwhile, Sanju jumps with joy and feels lucky to have Neeti in his life.

On the other hand, Parineet gets emotional in front of Neeti while she misses Rajeev.

Neeti gets angry as no one cares for Parineet after her father Jaswant died.

Raged in anger, Neeti calls Vikram and makes him realize their mistake, and exposes Mandeep.

On the other hand, Vikram finds out that Parineet is not living with Rajeev but with Neeti instead.

Later, Vikram confronts Mandeep on how she can be so selfish and leave Parineet all alone at the bus stand.

Neeti explains to Parineet that she should stand for herself and Mandeep should be exposed in front of everyone.

Shattered after finding out the truth, Gurpreet cries out longing for her daughter Parineet.

Not bothered by her evil actions, Mandeep admits her fault while Harman blasts his anger on Mandeep.

Vikram promises Gurpreet that he will fulfill his responsibilities of being Parineet's brother and find out Rajeev's address.

Harman feels thankful for a son like Vikram and sends him to solve this problem.

Later, Vikram knocks on the door of Rajeev's friend and gets Rajeev's address.

On the other hand, Neeti and Rajeev eagerly wait for the morning as they will be stepping into a new phase of their lives.

The next day, Vikram reaches Chandigarh and meets Parineet.

Vikram informs Parineet that he has got Rajeev's address and will find him soon.