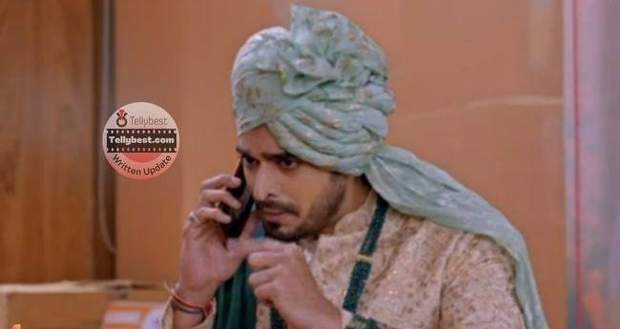 Today's Parineeti 28th December 2022 episode starts with the journalists urging the police officer to come out to answer their questions.

When the police officer comes out to answer the questions, the journalists shower him with harsh questions while Neeti looks at him with a smug smile.

The police officer then calls Mr. Ahlawat (Rakesh’s father) to inform him that he cannot wait any longer, he has to take action against Rakesh and cuts the call.

Meanwhile, in Rakesh’s home, Mr. Ahlawat scolds his wife for not changing Rakesh’s mind about Pari and his wife begs him not to drink this much.

With anger in his eyes, Mr. Ahlawat mentions that one hand he is trying his best to make Rakesh win the vote, and on the other hand Rakesh is ruining his reputation for Pari.

At the same time, Mr. Ahlawat gets a call from his senior who orders Ahlawat to deal with Rakesh soon if Ahlawat still wants the ticket.

Mr. Ahlawat then calls a goon whom he orders to take care of Pari.

Meanwhile, Neeti along with the journalists are trying to enter the police station while the constables are holding the stick as a barrier.

However, this stick hits Neeti on her stomach causing Neeti to flinch in pain and she sits on a nearby bench.

She then calls Rajeev but is unable to hear Rajeev’s voice and Rajeev cuts the call.

Back in Rakesh’s party office, the pandit orders Pari and Rakesh to do the pheras but Pari burns the knot with a fire stick after picking it up from the havankund.

Rakesh orders Pari to calm down but Pari calls out Rajeev’s name with fury in her eyes.

Rajeev arrives there at the same time and starts beating the goons with a fire stick while Pari looks scared.

While Rajeev is busy with the goons, Rakesh hits Rajeev’s head from behind causing Rajeev to fall to the ground.

Rakesh’s men then hold dizzy Rajeev and Rajeev looks at Rakesh with fuming anger who just smiles sarcastically at Rajeev.

When Pari begs Rakesh to let Rajeev go, Rakesh announces that he wants Pari to love him the same way Pari loves Rajeev.

In reply, Pari reminds Rakesh that love cannot be achieved through violence but Rakesh turns away.

On the other hand, in Bajwa’s house, Biji tells everyone that she feels in her gut that Rajeev and Pari are in trouble and Gurinder prays to god for Rajeev’s safety.

Monty then calls Neeti to know Rajeev’s location who informs him about Rajeev going alone to find Pari.

After cutting the call, Monty informs the news to everyone and Biji's health starts deteriorating due to stress whereas Neeti is anxiously waiting for Rajeev and Pari at the police station.

On the other hand, in the party office, Rakesh orders his goons to tie Rajeev from the ceiling with a rope around his neck.

While Rajeev is standing on the thin half pillar, Rakesh orders Pari that she has two choices either run away or marry him to save Rajeev.

© Copyright tellybest.com, 2022, 2023. All Rights Reserved. Unauthorized use and/or duplication of any material from tellybest.com without written permission is strictly prohibited.
Cached Saved on: Wednesday 25th of January 2023 11:18:36 AMCached Disp on: Sunday 5th of February 2023 03:59:09 AM