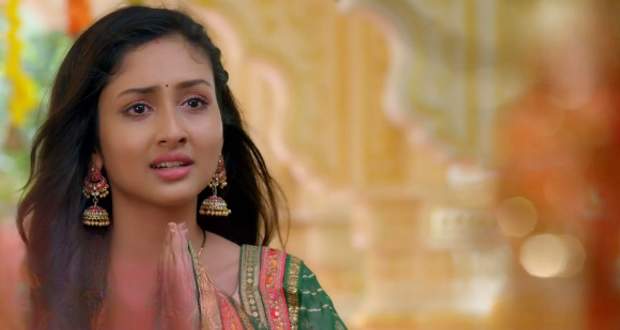 Seeing Neeti in work cloth, confused Rajeev reminds her of her leave.

He tries very hard to change Neeti’s mind so she can go with him to Naman’s sangeet.

When Neeti reminds him about his bailing on their first night, Sanju announces that she is taking revenge on him.

Neeti tries to calm Sanju down but he walks away angrily.

Later at home, while Rajeev is fuming with anger, Parineet enters the room.

Seeing Parineet, Rajeev urges her to go with him to sangeet and meet his friends.

Thinking this is the perfect opportunity to spy on Rajeev, Parineet agrees to go.

He then tries to hug Pari but she runs away.

Outside, she calls Neeti to inform her about her plan of spying on Rajeev.

She also thanks Neeti for reminding her about her old self.

During the call, Neeti reveals her duty getting canceled and her plan with Sanju.

Hearing this, Pari congratulates her and cuts the call.

Meanwhile, Rajeev calls Monty to tell him that he is taking his trophy wife as Neeti is busy.

At the same time, Neeti arrives at the office and asks Sanju if he is referring to her as a trophy wife.

Elsewhere in Rajeev’s home, Mishika is urging Chandrika to arrange pizza for her.

Parineet calmly tells Mishika that she has read that she needs to eat to stay strong for her Pari doll.

This seems logical to Mishika and she finishes her food quickly.

Hearing this, Chandrika advises Pari to look very pretty so Rajeev cannot take his eyes off her.

On the other hand, in office, Rajeev quickly informs Neeti that he was calling his friend’s wife a trophy wife, not her.

This makes Neeti even angrier as she thinks Sanju can easily call her that.

To cover it up, he informs Neeti that his Taijii’s name is Parminder and her husband used to call her Pari.

Without thinking much, Neeti happily informs Sanju that she can go with him in sangeet.

Meanwhile, Pari meets Natasha (Naman’s girlfriend) in a clothing shop who helps her to select a saree for the function.

She even invites Pari to her sangeet.

© Copyright tellybest.com, 2022, 2023. All Rights Reserved. Unauthorized use and/or duplication of any material from tellybest.com without written permission is strictly prohibited.
Cached Saved on: Monday 21st of November 2022 08:28:56 AMCached Disp on: Thursday 1st of December 2022 10:26:16 PM