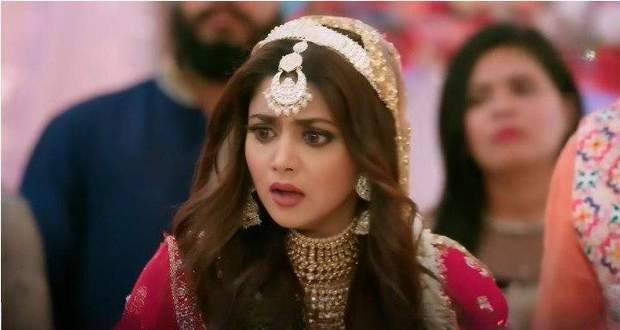 Today's Parineeti 28th June 2022 episode starts with Sanju entering his room back while his friends follow him to scare Sanju that it might be a sign from God.

Sanju's friends walk out while Parineet arrives and he accidentally throws a pillow at him.

Parineet notices Sanju's injured hand and offers to put ointment on it while Sanju thinks how mean and selfish he is.

On the other hand, a psychic lady warns Sukhwinder that there is something wrong with Neeti's kundali.

Further, the priest arrives while the psychic lady says that she cannot let Sanju and Neeti marry.

Meanwhile, Simmi gets skeptical as she notices Monty sneaking out to attend a wedding.

On the other hand, Rajeev thinks of not being there for Parineet and asks her if she is fine.

Parineet says she is fine but her heart is hurt as the ring was given to her by her father and misses him.

Sanju asks if Rajeev is a lucky man while Parineet says she is lucky to have Rajeev as he is always there to protect her.

Sanju thinks of the times he saved Parineet and offers to wipe out Parineet's tears and tries to console her by putting his hand on Parineet's head.

Further, Monty arrives at the wedding followed by Simmi and is determined to find out the truth.

Suddenly, Neeti arrives in Sanju's room and asks Sanju and Pari if they are sharing an emotional moment without her.

Sukhwinder scolds Neeti and orders her to go back to her room as it is a bad omen to meet the groom before marriage.

On the other hand, the police officer teaches the taxi driver a lesson while the taxi driver tries to put fake allegations on Parineet and gets beaten by Gurpreet, Vikram, and Harman.

Sukhwinder warns Neeti not to do anything which might create problems in her marriage as a psychic lady warned her about her marriage.

Neeti recognizes the woman and says she said the same thing to her and promises Sukhwinder she will not do anything to stress her.

Sukhwinder appoints Parineet to keep an eye on Neeti which makes Neeti jealous as she is becoming Sukhwinder's favorite and Sanju was also talking to her.

Further, Parineet shares with Neeti that she is missing her father and gets emotional.

© Copyright tellybest.com, 2022, 2023. All Rights Reserved. Unauthorized use and/or duplication of any material from tellybest.com without written permission is strictly prohibited.
Cached Saved on: Tuesday 22nd of November 2022 07:19:40 PMCached Disp on: Friday 2nd of December 2022 02:17:05 PM