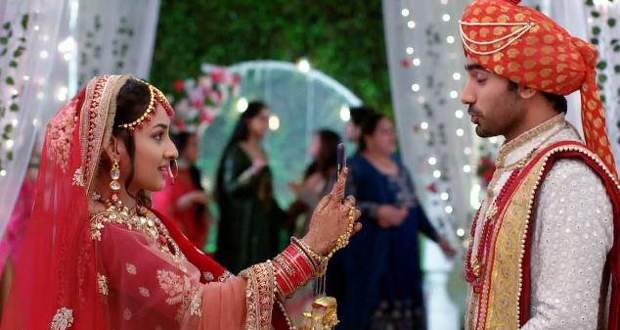 Today's Parineeti 28th March 2022 episode starts with Rajeev claiming to stand by Parineet always as she is his wife now and pledges to take care of her no matter what.

Later, Rajeev explains to the police officer how Rakesh threatened Parineet to kill Rajeev and shows him the recorded video.

Rakesh is arrested by the police and is charged with an attempt to murder.

Frustrated by his son's actions, the MLA says Rakesh deserves to be punished for his actions and decides not to protect Rakesh this time.

Later, Rajeev gets a cut on his hand from fighting Rakesh. Parineet helps Rajeev to do his dressing expressing her affection for him.

Meanwhile, both Rajeev and Parineet gaze into each other's eyes in admiration.

In the wedding ceremony, Nupur and Simar ask Rajeev to promise to take care of Parineet in every situation as a gift from their brother-in-law.

Rajeev says he will fulfill all his promises while Parineet looks at her husband with adoration.

Later, Parineet gets emotional as she leaves her house for the Bidaai ceremony.

She reminisces about her childhood spent at her house and cries.

Gurvinder, promises Gurpreet that she will take care of Parineet like her own daughter.

Later, Rajeev calls Parineet a lioness as she saved his life from Rakesh’s attack.