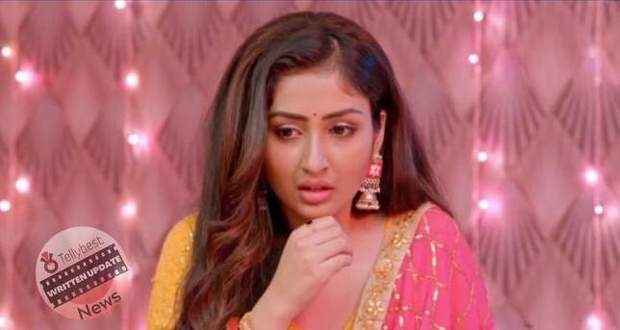 She gets shocked to hear Pari’s voice and Pari quickly requests Neeti to rescue her from the brothel in a panicked voice.

Pari then starts narrating how she met a taxi driver who sold her to a brothel and some hoardings are around.

Pari further informs Neeti that if Neeti does not save her today then Pari will be sold and Neeti urges Pari to send her location.

Pari nods and cuts the call, but the phone switches off before she can send Neeti the location.

Looking at the phone, Pari feels desperate and the guards ordered her to come out quickly.

Meanwhile, Neeti stares at the phone in horror and tries to call Pari back but fails.

While pacing in the room, Neeti collides with Rajeev and he locks his arms around him.

He then starts telling Neeti that it is romance time and Neeti tells him about Pari being kidnapped.

She further adds that she is sure Pari is caught that’s why she did not send the SMS.

Hearing Neeti’s description, Rajeev questions her if she remembers any sound.

Neeti tells him about the train sound and Rajeev puts a hand on his head in shock.

He informs Neeti that they should start searching for Pari from the jungle-side brothel.

Neeti nods and starts cursing Rajeev for not being a good husband.

He orders Neeti to calm down and advises her to stay at home for the baby’s health.

Neeti denies this and orders, Rajeev, not to waste time.

On the other hand, Gurpreet worriedly announces that Pari still has not arrived home, and Harman questions if he should visit Bajwa’s house.

Gurpreet denies it as she does not want to bother the Bajwa family.

Mandeep suggests calling the police but Gurpreet again denies it because of the family’s reputation.

Hearing this, Mandeep angrily mutters under her breath that no one cares about her son.

Later, the brothel owner orders every girl to learn some shy attitude from Pari if they want to earn a good customer like her.

Pari comes out of the washroom at the same time and meets her friend there.

Pari’s friend questions Pari if she informed her family and Pari replies that she has told a very close friend of her.

That girl tells Pari that she hoped they get saved soon as she is the only daughter in her family.

Later the brothel owner threatens every girl with a gun that if they plan to run away then she will shoot them.

On the other hand, during the car ride, Neeti acts as having a very bad stomach and Rajeev stops the car to check.

Neeti quickly changes her position to driver's seat and orders Rajeev to sit in the passenger position.

© Copyright tellybest.com, 2022, 2023. All Rights Reserved. Unauthorized use and/or duplication of any material from tellybest.com without written permission is strictly prohibited.
Cached Saved on: Monday 21st of November 2022 05:34:36 AMCached Disp on: Thursday 1st of December 2022 11:09:16 AM