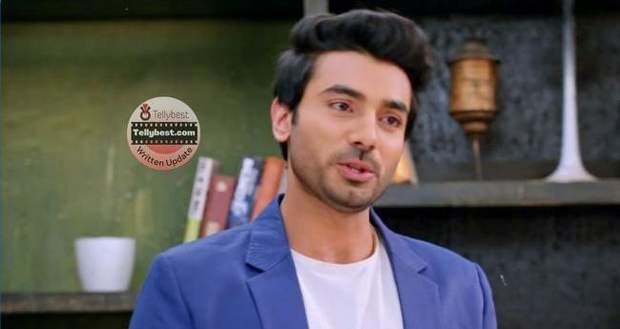 When Neeti questions Rajeev about what he is doing here, Rajeev tells her that after hurting herself, Pari refused to drink turmeric milk so he was helping her with a sheepish look.

Neeti asks Pari if she is okay after hearing this and while Pari announces that she is all right, Neeti’s eyes fall on a picture.

She then urges Pari to show her the picture but Pari changes the topic by saying that Neeti is tired so she should take some rest.

On one hand, Neeti feels confused about Pari’s protectiveness for the picture; on the other hand, Rajeev feels certain seeing the glimpse of the picture that Pari has feelings for him yet.

Later, Biji orders Chandrika to follow her so they can eavesdrop on Pari and Rajeev’s conversation, and even though Chandrika does not want to do this, she obeys Biji’s orders.

Biji gets pissed off when she notices Neeti dragging Rajeev away cheerfully and she even murmurs that this Neeti has no shame.

Biji and Chandrika then enter Pari’s room without her notice and get sad to see Pari looking at Rajeev’s picture with a gloomy expression.

On the other hand, Neeti surprises Rajeev with a canopy bed on the rooftop which stuns Rajeev and he questions her why she has become romantic suddenly and Neeti orders him to enjoy the moment.

A flashback shows Neeti sobbing in her room when Gurinder arrives there and advises her to spend more quality time with Rajeev otherwise someone will steal him from Neeti.

Neeti only looks at Gurinder with despair and Gurinder walks out of the room.

Outside the room, Gurinder thinks now Pari will not get the chance to get close to Rajeev.

Back in present, Rajeev grabs Neeti’s hand to kiss it while complimenting her in a sweet voice.

Meanwhile, Chandrika tries her best to stop Biji from going to the terrace but fails.

When Biji arrives on the terrace, she finds Neeti and Rajeev holding each other hands and yells at Rajeev.

She even announces that Rajeev has forgotten Pari while glaring at Neeti.

Rajeev, however, tells Biji that Pari was also going to join them but Pari is ill so Neeti and Rajeev are talking to each other.

Biji then orders Rajeev to walk away so she can talk to Neeti alone and Rajeev obeys the order reluctantly.

In the meantime, Monty and Babli are bickering with each other when Rajeev arrives there and informs Monty about Biji's orders.

Babli tells Rajeev that he is suffering for ruining Pari's life and walks away.

Meanwhile, Biji angrily orders Neeti to stay away from Rajeev which makes her teary, and she runs away from there.

Later, on one hand, Biji orders Pari to spy on Rajeev; on the other hand, Neeti questions Rajeev if he has any more wives.