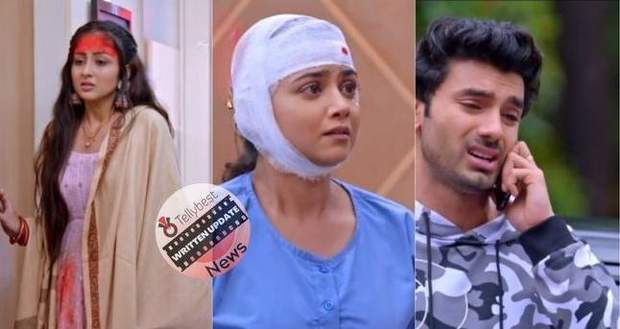 Today's Parineeti 29th September 2022 episode starts with Gurpreet urging Pari to call Rajeev to the room so Pari can apologize to him.

Gurpreet even tells Pari that Rajeev is a very good person and Pari has misbehaved with Rajeev.

In the meantime, a doctor orders Pari to come out of the hospital room and informs Pari that Gurpreet’s heart is very weak so Gurpreet should not get any shock.

Hearing this, Pari gets stressed and questions God why he has put her in this position.

Meanwhile, Harman arrives there and Pari urges Harman to sit with Gurpreet.

Afterward, when Pari enters Neeti’s room, Neeti jokingly tells Pari that she wants Pari to be a second wife to Sanju.

This remark irritates Pari and she orders Neeti to never say such a thing.

At the same time, Rajeev approaches them and announces that Pari and Neeti are not just friends anymore.

Hearing this, Pari yells at Rajeev to close his mouth but Rajeev announces that Pari and Neeti are both his wives.

This revelation shutters Neeti and she falls to the floor while trying to reach for Sanju.

When the doctor arrives in the room to check Neeti, he declares Neeti to be dead.

However, in the meantime, the taxi driver shakes Pari up from her sleep and Pari realizes it was just a bad dream.

Realizing this, Pari panics as she thinks Rajeev must have told Neeti the truth.

On the other hand, in Neeti’s hospital room, Rajeev is telling Neeti how he always hated Barnala and wants to escape from there.

Further, Rajeev adds that his mom was forcing him to marry so he had no choice.

At the same time, a nurse interrupts Rajeev during his explanation by ordering him to leave as she has to do a sponge bath on Neeti.

Hearing this, Rajeev thinks that he has to tell Neeti the truth before Pari arrives here.

© Copyright tellybest.com, 2022, 2023. All Rights Reserved. Unauthorized use and/or duplication of any material from tellybest.com without written permission is strictly prohibited.
Cached Saved on: Monday 21st of November 2022 05:54:01 PMCached Disp on: Friday 9th of December 2022 04:57:15 AM