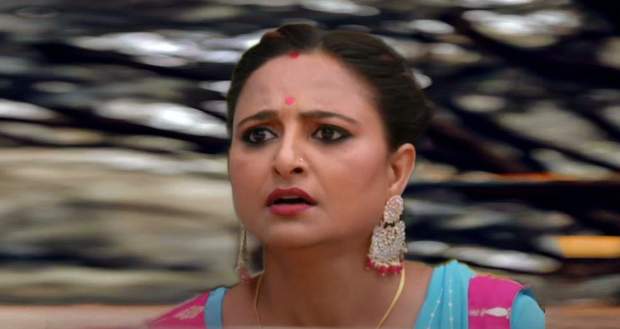 Today's Parineeti 2nd April 2022 episode starts with Mandeep meeting Parineet and decides to speak out the truth about the deal of 9 acres of land.

Meanwhile, Harman arrives at the spot and stops Mandeep from exposing the truth to Parineet or he will divorce Mandeep.

Later, Harman diverts Parineet by saying they miss their daughter while Parineet gets emotional.

On the other hand, Gurvinder hugs her daughter-in-law Parineet and calls herself lucky.

Jaswant, Mandeep, and Harman leave for their home while Parineet gets ready for her first day in her in-laws' kitchen.

Meanwhile, Mandeep shouts at Harman for the 9 acres of land and gets upset about losing all the money and property.

Later, Mandeep says Parineet will face the curse of the land she used to start her new life.

On the other hand, Parineet's mangalsutra gets broken, and she feels worried about her married life.

Later, Gurvinder tells her not to worry about it as she is always there by her side.

Rajeev brings a gift for Parineet which is an evil eye bracelet that will protect her from any negativity.

Later, Parineet gets emotional and feels lucky to have a husband like Rajeev while the guests clap with joy.

Meanwhile, Rajeev feels awkward and feels the gift will increase the misunderstandings between him and Parineet.

At Kakkar's house, Mandeep and Harman continue to blabber while Harman warns Mandeep that it will create tension in their relationship if she didn't keep her mouth shut.

Mandeep is anxious about the lost land and gives a hint to Gurpreet that Pari's in-laws are greedy.

Later the guests shower Parineet with blessings while Gurvinder feels elated with joy after she gets 9 acres of land to get her respect back in the village.

Meanwhile, Rajeev thinks of Neeti while he talks to Monty. Monty says Rajeev is lucky to have a wife like her as Parineet is extremely kind and sweet.

Later, Rajeev avoids talking to Monty on this matter while he reminds him of the sweet gestures he is doing for Parineet.