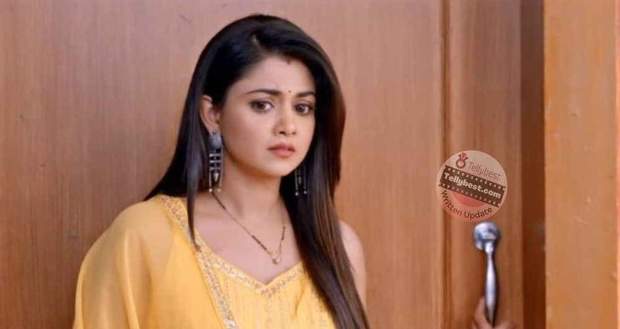 Today's Parineeti 2nd December 2022 episode starts with Neeti questioning Pari about what is going on between her and Sanju.

Sanju tries to calm Neeti down by saying Neeti is thinking too much but ignoring Sanju, Neeti informs Pari that she is snatching her Sanju away as she has not gotten her husband’s love.

Neeti even adds that Pari is having an extra-marital affair looking at Pari straight into her eyes.

Sanju announces that Neeti is overthinking but Neeti orders him to stay out of her and Pari’s relationship.

However, grabbing Pari’s arms, Neeti orders her to speak the truth otherwise she will see Neeti’s dead body.

Hearing the word death, Pari puts her hand on Neeti’s mouth and mutters that Neeti is thinking exactly right.

Pari tells Neeti that she has fallen in love with Sanju while Sanju admires Pari for her strength.

On one hand, Neeti questions Pari about how she can do this with her; on the other hand, Sanju urges Pari to stop talking.

Turning to Neeti, Pari informs her that she is also a human whose husband has already left her but Sanju is always there whenever she needs him in breaking voice.

When angry tears stream down Neeti’s face, Pari announces that she has fallen in love with Sanju due to his gestures.

Neeti then questions Sanju if he also feels the same way but before he can answer, Neeti feels pain in her stomach.

Looking at Neeti wincing in pain, Sanju and Pari try to touch her but she orders them to stay away.

Neeti even shouts that instead of becoming an aunt to her baby, she has become her sautan (Sanju’s second wife).

When Sanju orders Neeti to calm down for their baby’s safety, Neeti announces she will abort it as she does not want to look at it and recall her cheating husband Sanju, and cheating best friend, Pari.

Sanju reminds Neeti about her dreams for their children and even Pari tells Neeti that Sanju loves her to which Neeti replies Pari has come between them.

Neeti further screams that if Sanju did not love Pari, he would not hide the photo while Pari and Sanju look surprised.

Pari tells Sanju only loves her and to save his relationship, Sanju also announces Pari only has those feelings not him.

Thinking all this in her head, Neeti slips her feet on the stairs and falls rolling down the stairs despite Rajeev and Pari calling her name.

After Rajeev and Pari take the unconscious Neeti to the hospital, Biji announces that she is worried if Neeti does not get her senses back, her family will blame the Bajwa family for it.

Meanwhile, in the hospital, Rajeev begs the doctor to cure his Neeti.