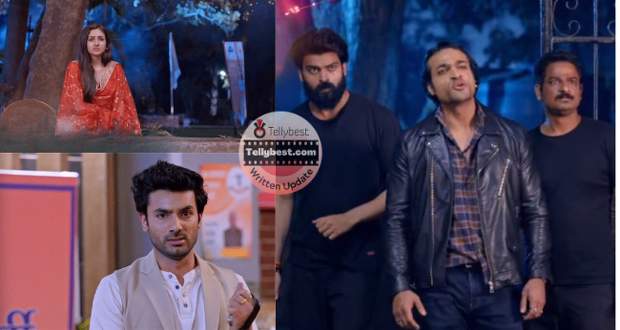 While the goon winces in pain, Pari stands up in a panic and runs toward the jungle.

After Pari walks away, Leo and the rest of the goons arrive there and Leo tells himself that he will not let Pari live now as she has killed the goon.

At the same time, Mr. Ahlawat calls Leo to know the update and Leo promises Ahlawat that he will kill Pari before sunrise.

Leo even calls Pari stupid for running toward the jungle instead of the road and as soon as Leo cuts the call, he orders his goons to find Pari at any cost.

Meanwhile, finding the goon’s body, Rajeev praises Pari for being brave whereas Pari falls while running in the jungle.

Rajeev then also heads towards the jungle while praying for Pari’s safety.

This angers Neeti even more and she yells that Pari and Rajeev’s safety is more important to her, making the police officer close their mouth.

Monty arrives there just then and gets shocked when Neeti informs him that Pari and Rajeev are not there.

Monty and Akshay calm Neeti down by advising her that Pari and Rajeev are safe and Akshay walks away.

After Akshay leaves, Neeti and Monty get into the car to search for Pari and Rajeev.

Meanwhile, in the jungle, Pari is sobbing feeling sorry for herself but hides quickly behind the tree and gets worried for Rajeev when she overhears Leo’s plan to kill Rajeev.

She hopes Rajeev does not find her as Rajeev’s life is important for Neeti’s happiness and she does not want Rajeev to die.

To calm Biji down, Babli calls Monty to talk to Pari but Babli gets worried as Monty informs her that Pari and Rajeev are not with him.

When Babli tells this to Parminder and Chandrika, Parminder announces that she is sure Rakesh is still after Pari and Rajeev.

In the meantime, in Ahlawat’s mansion, the police officer informs Mr. Ahlawat that they need to issue an arrest warrant against Rakesh since they cannot find him anywhere in the house.

With confidence, Mr. Ahlawat orders the police officer to search Rakesh’s bedroom and when the police enter the room, they find a girl wrapped in Rakesh’s arm.

Noticing the police officer, Rakesh informs that he is here with this girl since the evening which confuses the police.

Rakesh further tells the police officer that he went out with this girl for a dinner party so if he wants he can check the slip.

Once the police walk away, Rakesh orders the girl to stay away from him as Pari deserves this place only.

While the girl looks surprised, Rajeev wishes to meet Pari in another life in which he will be able to love her without any complications.

In the meantime, in the jungle, Rajeev puts a hand on Pari's mouth to keep her silent which scares Pari and she calms down after she sees Rajeev.

Rajeev then jokes with Pari that he does not think they will be able to get out of this jungle alive when Pari announces that they need to run.

While Pari looks scared, Rajeev informs Pari that he was just joking and Pari looks at him sternly.

At the same time, a goon attacks Rajeev and he starts beating the goon while Pari looks worried.

Rajeev orders Pari to shoot the goon but the goon stabs Rajeev in the leg.

Later while running on the road, Pari and Rajeev get scared to see a man walking towards them.