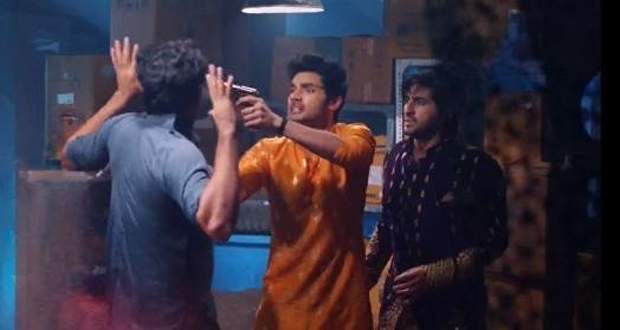 Further, Neeti finds something is off and tries to talk to Sanju.

On the other hand, Simmi and Vikram find out that Rajeev's office is closed and he might have gone to meet Mishika.

Later, Simmi and Vikram find out that it was Rajeev who Vikram saw at Neeti's wedding and is worried if he is lying to them.

Meanwhile, the kidnappers try to wake up Mishika and start fighting with each other.

Suddenly Mishika wakes up and tries to escape while the kidnappers follow her.

Mishika hides away while Rajeev and Monty walk towards the kidnapping spot.

Further, Balwinder starts to call Mishika bad luck which angers Rajeev and he walks away.

Ajay gets worried that he might get married to Neeti.

Simmi and Vikram also arrive near the warehouse. Simmi says that Rajeev is innocent which leads Vikram to quarrel with Simmi.

Later, Chandrika calls Simmi and informs her about Mishika's kidnapping.

Meanwhile, the kidnappers start to find Mishika and announce to beat her when found.

Mishika finds a door leading outside which leads the kidnappers to follow her while Rajeev and Monty arrive inside the warehouse.

On the other hand, Shreya arrives at Neeti's wedding with a wound on her forehead.

Shreya informs Neeti that she was kidnapped by some people.

Neeti understands that she was kidnapped by the taxi drivers.

Further, the kidnappers find Mishika hiding in the car and Rajeev watches them taking Mishika along with them as he is held at gunpoint.

© Copyright tellybest.com, 2022, 2023. All Rights Reserved. Unauthorized use and/or duplication of any material from tellybest.com without written permission is strictly prohibited.
Cached Saved on: Wednesday 25th of January 2023 03:24:33 PMCached Disp on: Thursday 9th of February 2023 07:32:59 AM