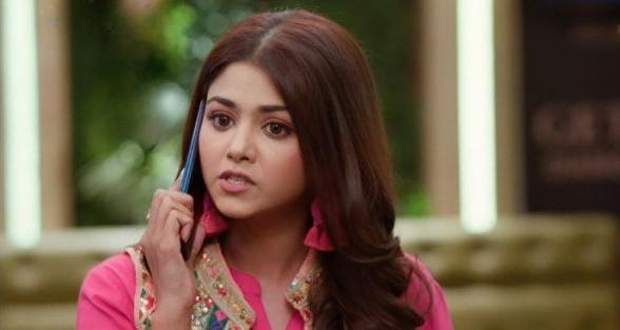 Today's Parineeti 2nd June 2022 episode starts with Neeti teasing Sanju that she would have liked it if he had broken someone's heart to get into her life.

On the other hand, Parineet's housemaid says that breaking of the Mangalsutra is considered a bad omen.

Parineet says that there's nothing like that but is in deep thoughts inside thinking if Rajeev will be separated from her again.

On the other hand, Neeti's mother gazes at the jewelry she kept for Neeti and packs them up to get them polished in Chandigarh.

Neeti receives a call from her mother while Neeti fails to pick it up.

Further, Neeti is anxious after noticing the call meanwhile Neeti's mother makes up her mind to visit her daughter in Chandigarh.

Later, Neeti calls Vikram and shares her fear of getting scolded by her mother.

Vikram informs that Gurpreet has cleared all her doubts and her mother's eyes sparkled with pride and need not to worry and pick up her call instead.

On the other hand, Parineet gets ready to visit Rajeev's office to deliver his lunch while Sukhvinder informs Pari about her arrival at Chandigarh.

Later, Neeti gets scared to pick up Sukhvinder's call again and decides on picking up her call only after bearing two or three babies.

Rajeev overhears Neeti's murmurs and bursts out laughing to see Neeti scared like a cat.

Later, Rajeev suggests that Neeti's mother should arrive at her wedding and they will get her blessings as well.

Feeling irritated by Sanju's suggestion, Neeti says that she wants his family at the wedding as well then it will be fair play.

Meanwhile, Rajeev leaves the jewelry shop while Parminder's friends notice him and wave him hello.

Parminder's friends find out that Rajeev has arrived to look for a Mangalsutra and start to question him.

Further, Rajeev tries to cover up and diverts them to another counter while Neeti looks for Rajeev.

Parminder's friends try to make fun of Neeti while Rajeev skims away.

Later, Neeti says that she will definitely show them her fiance while they mock Neeti for requesting her fiance to arrive for a short visit.

© Copyright tellybest.com, 2020, 2021. All Rights Reserved. Unauthorized use and/or duplication of any material from tellybest.com without written permission is strictly prohibited.
Cached Saved on: Friday 3rd of June 2022 12:03:57 AMCached Disp on: Saturday 2nd of July 2022 08:48:17 PM