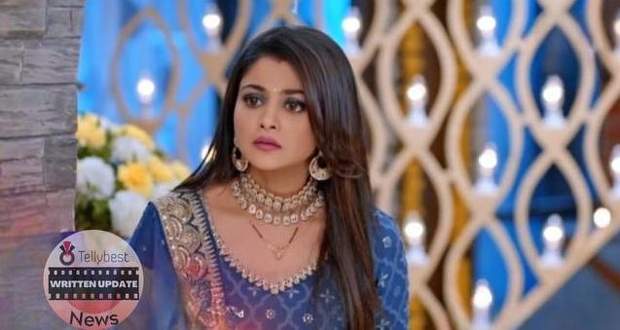 She further announces that she will pamper herself only now.

While Neeti is applying cream on her face, Rajeev arrives near the door and decides to apologize to Neeti.

He then seats beside Neeti and takes her hand on his but Neeti looks at him furiously.

Rajeev informs Neeti that anger is not good for a pregnant lady, but Neeti glares at him.

To cheer up Neeti’s mood, Rajeev slowly takes Neeti’s hands and starts applying the cream on his cheek while Neeti stares at him.

However, rubbing his cheeks on Neeti’s cheeks slowly, Rajeev questions Neeti in a low voice if she is still angry.

Neeti replies she does not know while her breath hitches and she goes to sit on the bed.

Looking at Neeti with love in his eyes, Rajeev approaches her and slowly removes the clip from her hair.

Pari opens the door while Rajeev and Neeti are lost in each other.

Pari decides to walk away but Rajeev stops her.

After Rajeev walks away, Neeti asks Pari seriously if she feels upset seeing Sanju loving Neeti but Pari denies it.

Pari also adds that she does not want to think about Rajeev anymore as it does not make any sense.

Ironically, Neeti calls Rajeev’s second wife fake, who has trapped Rajeev, and suggests that Pari get close to Rajeev and get pregnant.

Neeti clarifies that Rajeev will never be able to forget Pari if she gets pregnant with his baby when Pari looks at her with confusion.

However, Pari dismisses it and walks away from there.

While Pari is thinking about Neeti’s words, she collides with Rajeev who asks her if she needs any help with her rangoli.

Pari however orders Rajeev to stop showing her his fake caring and focus on Neeti but Rajeev just stares at her.

Chandrika arrives there at the same time and Pari orders her to take Rajeev away from there.

Looking at Pari and Rajeev’s gloomy faces, Chandrika announces that she has arrived here at the wrong time.

Before Pari can respond, Neeti approaches them and gets excited seeing Pari’s rangoli.

She even orders Pari to move aside so Chandrika can take her and Rajeev’s couple pictures with rangoli.

Pari stares at Neeti and Rajeev’s closeness with envy and walks away abruptly.

Later, while Pari is sobbing in her room, Parminder and Tayaji arrive there and gives Pari a pair of beautiful earrings.

Pari nods and accepts the gift.

While Parminder tells Pari that she will give Neeti a gift too, they hear Gurinder’s voice.

To put some salt on Pari’s wounds, Gurinder gives Neeti a beautiful necklace set and urges Rajeev to lock it around Neeti’s neck.

Rajeev denies it thinking about Pari’s presence and tells Neeti that he feels shy around his family.

On the other hand, during driving, Gurpreet furiously informs Harman that she will talk to Rajeev about an ultimatum that he has to choose between Pari and the other woman, and Harman nods.

In the evening, Pari feels emotional recalling her childhood Diwali memories and tells herself how she used to feel secure with her family but now she does not know anymore.

Realizing she has not informed Gurpreet about her homecoming, Pari starts getting worried about Gurpreet arriving at Bajwa’s house.

Meanwhile, Parminder gets shocked to see Gurpreet and Harman standing at the doorway but welcomes them regardless.

Gurpreet then starts yelling Rajeev’s name and Rajeev along with Neeti rushes to the hall to see what is happening there.

Gurpreet then accuses Rajeev of betraying Pari but Gurinder orders her not to forget it is Pari’s in-laws’ house.

Gurinder further yells that her son has done nothing wrong taking Rajeev’s side.

This makes Gurpreet even angrier and she yells how can Gurinder be this heartless?

Pari then tries to calm down Gurpreet as yelling is harmful to her heart but Gurpreet turns to Rajeev and announces that he has lost all respect in her eyes.

© Copyright tellybest.com, 2022, 2023. All Rights Reserved. Unauthorized use and/or duplication of any material from tellybest.com without written permission is strictly prohibited.
Cached Saved on: Monday 21st of November 2022 06:05:26 AMCached Disp on: Friday 9th of December 2022 04:23:33 AM