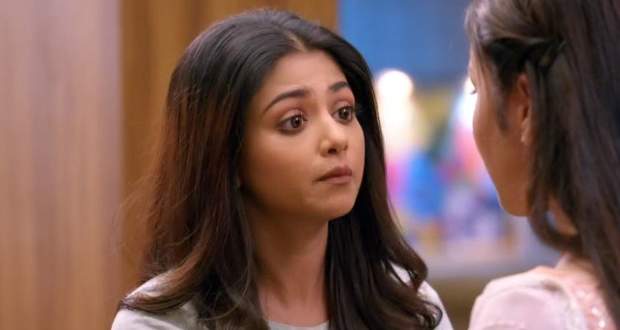 Today's Parineeti 30th April 2022 episode starts with Parminder making a grand entry while Rajeev is shocked to see Parineet at his house.

As soon as Parminder enters the living room, Parineet touches her feet but she avoids Parineet and stops her by asking for her introduction.

Later, Sanju says she is his wife Parineet.

On the other hand, Neeti arrives at the reception hall while she feels excited about her engagement and Parineet uniting with her husband.

Meanwhile, Parminder asks Pari to walk outside the doorstep while she asks Chandrika to bring arti and rice kalash.

In order to welcome Rajeev's wife and her daughter-in-law, she feels excited but stays firm.

On the other hand, Neeti calls Sanju while he is stuck in the Parineet drama.

Neeti's friend teases her by saying if her Sanju will ever arrive or ditch her like the bollywood heroes.

Later, Rajeev says he is arriving soon but Neeti jokes if he is busy welcoming someone else into his house.

Meanwhile, Chandrika introduces everyone to Parineet while being sarcastic.

Every member of the house feels embarrassed by Chandrika's introduction where she exposes secrets of the family by saying there was a daughter-in-law named Priyanka who ran away from the terror of Taiji.

Parminder stops Chandrika and orders her to leave.

On the other hand, Rajeev gets angry at Pari instead of welcoming her and asks why Pari has arrived in Chandigarh.

Meanwhile, Vikram hints Rajeev to shut his mouth and not talk to Parineet rudely.

Both Vikram and Rajeev start to fight as the argument heats up.

Affected by the fight between her brother and husband, Parineeti starts to cry.

Looking at Parineet's condition both Rajeev and Vikram stop fighting as they can't see her crying.

On the other hand, Sanju's poster for his engagement with Neeti gets ruined.

Neeti is worried and tries to contact Sanju but he is nowhere to be found.

Meanwhile, Rajeev says that he has to go somewhere and confesses that it is his engagement today.

Parineet is shocked and tries to process what she just heard.