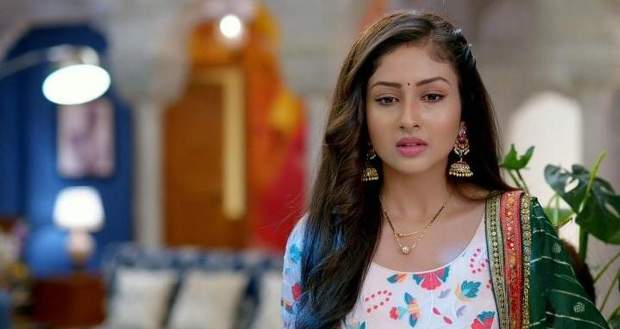 Today's Parineeti 30th July 2022 episode starts with Pari hearing Rajeev confessing love to someone in the shower and accidentally colliding with a vase.

Hearing the shattering sound Rajeev panicky comes out thinking that Pari heard him in the shower.

Pari wants to confront him but does not want Rajeev to blow up and leave home angry.

Rajeev gets puzzled about whether to tell Pari the truth and decides to refuse her for going to the party.

But Pari suddenly asks Rajeev if he's not happy with her and confronts him saying she heard him.

Before, Pari could complete Rajeev interrupts her and changes the subject saying he was cheering up Naman in the shower while saying I love You.

Rajeev tells Pari they are not going to Naman's party and makes an excuse of Naman's fiance cheating on him.

Pari does not know if she should believe Neeti or Rajeev.

Natasha calls Pari to invite her again but Pari refuses and explains about Rajeev has some important work.

At the same time, Rajeev and Neeti reach the Sangeet. Natasha asks Pari to not cut the call but Mishika interrupts her while talking.

Rajeev and Neeti go by without Pari knowing anything while Natasha requests Pari to come alone even for 10 minute.

Sanju introduces Neeti to Naman and he tells stories of Sanju being a player in college.

Neeti warns Sanju that she's going to break any other girl's bones but not her relationship.

Meanwhile, Pari reaches the Sangeet and saves Seema from falling and tells her about meeting Natasha while shopping and saving her from an accident.

Seema calls Pari an angel and tells her that her husband is lucky to get such a beautiful wife.

Later on, Seema points to Pari showing her Natasha standing with Rajeev, Neeti and Naman.

Pari excitedly starts walking towards them but the venue lights go off and Natasha's father starts the ceremony by praising Seema while teasing Naman and Natasha.

At the same time, Natasha's father calls Seema on stage. Before Neeti could see Pari standing with Seema a girl comes in front of her and blocks her.

Later on, Natasha's father tells everyone about his love story with Seema and at the end invites Sanju to say a few words as a special friend of Naman.