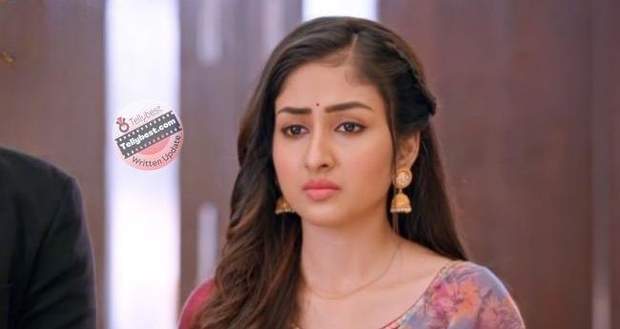 Today's Parineeti 30th November 2022 episode starts with Rajeev staring at Neeti questioning Rajeev about how many wives he has except her with tears in her eyes.

Hearing this, Rajeev tries to calm Neeti down by saying that Biji is very possessive of him so she wanted Rajeev to marry her favorite girl to which Neeti replies that Biji hates her.

Meanwhile, in Pari’s room, Biji urges Pari to pack Neeti’s bag to throw Neeti out of the house as she is trying to win Rajeev’s heart.

Pari however informs Biji that Neeti will never do anything like this while thinking Rajeev belongs to Neeti so she cannot do anything.

On the other hand, frustrated Neeti tells Rajeev that she is better than Rajeev who is cheating on Pari with another girl but Biji always praises him still while Rajeev shifts uncomfortably.

To divert Neeti’s mind from Rajeev’s thoughts, Sanju aka Rajeev orders her to focus on him and he even urges her to confess her feelings after wrapping his arms around her.

Neeti starts smiling through tears hearing Rajeev’s sweet talks while muttering that she hopes everyone starts loving her the way they love Pari.

In the meantime, Biji questions Pari if she wants to eat something and when Pari nods, Biji walks away to bring some food for her.

Pari tells herself that she hopes Biji accepts Neeti as Rajeev’s wife with open arms so she can leave the house peacefully.

She then starts limping while going to the washroom and Rajeev offers to help after entering her room but Pari denies it by reminding Rajeev she does not need his help because she has to walk alone in her life now.

Though Rajeev feels hurt hearing Pari’s taunts, he does not show it on his face and firmly orders Pari to let him help otherwise if Biji finds out he did help Pari, he would get scolded.

Pari lets Rajeev help her as she does not want Biji to get suspicious and Neeti arrives there at the same time and gets confused to see Rajeev here.

When Rajeev turns his head, he finds Neeti in the doorway and quickly informs her that he was helping Pari.

He also questions Neeti about what she is doing here and Neeti announces that she is here to check on Pari.

After Rajeev walks away, Neeti starts looking around Pari’s room to see the picture Pari was hiding out of curiosity.

Rajeev enters the room again when Neeti is looking through the closet and Neeti lies that she thought she will iron Pari’s wrinkled dress but Rajeev orders her to leave.

Afterward, Neeti advises Pari to snatch her rights from Rajeev who just looks at Neeti with wide eyes.

Later, Gurinder manipulates Neeti by announcing that Pari is the reason for Biji’s wrath but Neeti smilingly announces that she loves that Pari gets the love of everyone.

Meanwhile, in Pari’s room, her alter ego mocks her for creating more problems in Neeti’s life and Pari announces she will leave soon.

On the other hand, Neeti orders Sanju to accompany her so she can change Rajeev's mind to take Pari back.