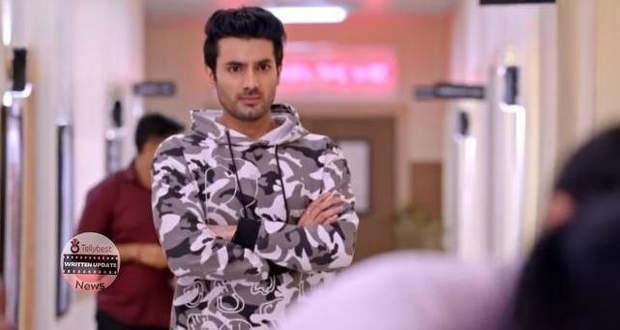 Seeing Pari, Rajeev closes his mouth in shock and stares at her shockingly.

Meanwhile, Neeti tells Pari that Sanju was explaining how his mom was forcing him to get married.

Neeti then urges Sanju to continue the story but Sanju stays quiet.

Further, Neeti adds that Sanju’s engagement does not matter anymore because now she is only Sanju’s wife.

Hearing this, Pari just stands there silently while Neeti looks at Sanju with loving eyes.

At the same time, a nurse enters Neeti’s hospital room to do a sponge bath and orders Sanju to leave.

When Pari tries to walk away, Neeti urges her to stay but Pari lies that she needs to talk to a doctor.

As soon as Pari and Rajeev come out of the room, they start shouting at each other.

On the other hand, Chandrika and Amit arrive at the hospital to search for Pari and Neeti.

In the meantime, Pari drags Rajeev to a nearby room to avoid Neeti overhearing their discussion.

Once in the room, Pari begs Rajeev not to say anything but Rajeev announces he does not want to lie anymore.

Hearing this, Pari reminds Rajeev that he is the one who has broken Neeti’s trust so he should keep the lie for Neeti’s health.

As expected, Rajeev rolls his eyes and accuses Pari of becoming exactly like him.

This makes Pari blind with rage and she informs Rajeev that Neeti is pregnant with his baby.

She even tells Rajeev how she has made the Bajwa family agree to accept Neeti as their daughter-in-law.

In the meantime, Neeti is looking for Pari and Sanju everywhere.

She feels confused as she knows Pari does not know Sanju that well so there is no reason for Pari and Sanju’s fighting.

Later while Rajeev is trying to touch Pari’s shoulder to express his gratitude towards her, Pari pushes him away.

At the same time, Neeti arrives there and gets shocked to see Rajeev lying on the floor.

When she inquires them about it, Rajeev lies that the floor is slippery that’s why he fell.

© Copyright tellybest.com, 2022, 2023. All Rights Reserved. Unauthorized use and/or duplication of any material from tellybest.com without written permission is strictly prohibited.
Cached Saved on: Monday 21st of November 2022 07:00:22 AMCached Disp on: Monday 5th of December 2022 12:59:56 AM