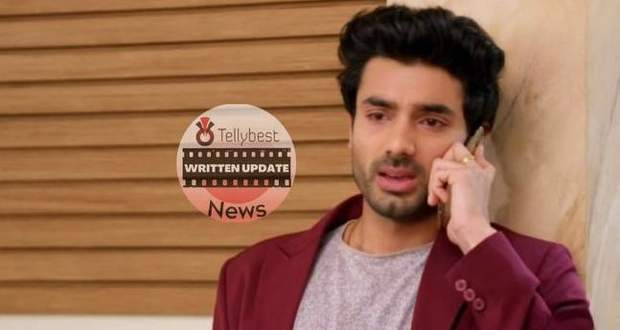 Today's Parineeti 31st August 2022 episode starts with Pari feeling dizzy while Rajeev looks at Neeti with love in his eyes.

Seeing Rajeev’s face, the doctor advises Rajeev to not shout at Neeti again.

After the doctor takes Neeti away, Rajeev hugs Ajay for being here.

In the meantime, Ajay promises his wife that he will not let her go.

While Rajeev informs Monty about Neeti’s recovery, Pari is running in the rain with tears streaming down her eyes.

Pari recalls her wedding memories and starts crying even harder as she thinks her world has crumbled down into pieces.

She thinks Rajeev is her husband but his heart belongs to Neeti, and the storm has arrived to destroy her life completely.

Meanwhile, in the hospital, Rajeev promises himself that he will do whatever Neeti wants from now on.

At the same time, Ajay brings some ladoos to distribute among hospital staff to celebrate Neeti’s recovery.

Seeing Ajay, Rajeev gives him a tight hug and informs him that today is his happiest day as his Neeti has come back from death.

On one hand, Rajeev is moving around in happiness and on the other hand, Pari arrives at Rajeev’s house and breaks down in tears.

While in the hospital Rajeev is eagerly waiting for Neeti’s consciousness because he thinks Neeti will take his name.

However, as soon as Neeti comes to consciousness, she asks the doctor for Pari and gives the doctor Pari’s number to call.

When Pari picks up, she answers Neeti in a strange voice that she will come to meet her soon.

After cutting the call, Pari questions herself about how she will face Neeti now.

Meanwhile, in the hospital, Rajeev pretends to be mad at Neeti for giving Pari more importance.

Hearing this, Neeti informs Rajeev that he is her lifeline and Pari is her life.

Disappointed Rajeev breathes a shy of relief as Pari has not seen him in the hospital.

On the other hand, Pari enters the house, and Chandrika inquires about Neeti’s health.

Turning her back towards Chandrika, Pari informs her about Neeti being alive.

Hearing Pari’s slow reply, Chandrika is sure Rajeev has done something to upset her but she does not ask.

On one hand, Pari’s heart breaks into million pieces and on the other hand, Rajeev and Neeti spend some quality time together in the hospital.