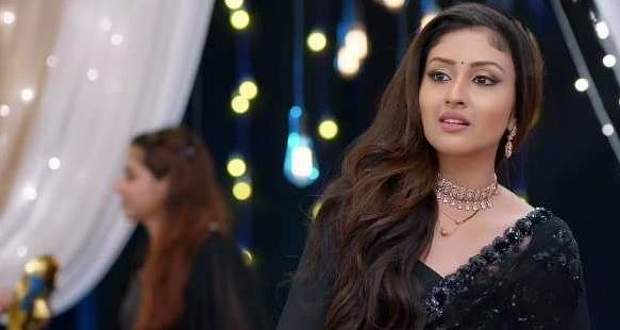 Today's Parineeti 3rd August 2022 episode starts with Neeti getting a call from Pari while Pari is following Ajay, misunderstanding him as Sanju.

However, believing Pari's words despite just seeing Sanju in the room, Neeti goes to check on him.

Meanwhile, Ajay signals Sanju and climbs a rope made from cloth.

However, Neeti barges into the room while Sanju leaves the rope in panic.

Neeti ignores Sanju and sees him in the same outfit but seeing the open window Neeti runs to check if some woman was there but sees only Ajay's clothes.

Furious Sanju goes angrily from the room after accusing Neeti of being unnecessarily suspicious of him.

On the other hand, Pari does not understand how Sanju can be present in the room while she sees Ajay aka Sanju falling and getting injured.

Later on, Neeti blames Rajeev's action for making Pari suspicious of everything.

While talking to Seema, Pari sees Sanju's friend Shreya and starts following her.

Meanwhile, Ajay wears the same clothes as Sanju while he tells Sanju about Shreya being present at the party.

Afraid of getting caught Sanju advises Ajay to be careful while Ajay assures Sanju.

Meanwhile, Neeti comes and both Sanju and Ajay wear the mask.

Neeti takes Ajay to the side thinking of him as Sanju and asks for his forgiveness while panicked Ajay follows Sanju's instructions from afar.

Neeti goes from there without suspecting anything.

Meanwhile, Pari follows Shreya while Shreya goes into a room in which Ajay's waiting for her.

Pari confronts Ajay and accuses him of cheating on Neeti.

After listening to Pari's accusations Ajay replies he was saying I love you to Neeti and shows Pari his call list as evidence.

At the same time, Shreya makes an excuse that she was using the bathroom of this room.

Pari apologizes and goes from there.

On the other hand, Monty is on a date with a woman while Sanju calls Monty again to Naman's Sangeet.

Reluctant Monty makes many excuses but Sanju does not listen to Monty and demands him to come by hook or crook.

While Monty requests Sanju to stop this melodrama of two wives and choose one while Monty's date being a gold digger seduces him to go into a hotel room to chill.

However, Monty is suspicious of the woman but still goes with her.