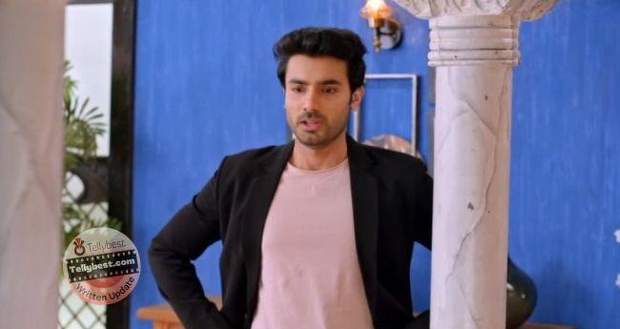 The nurse enters the room just then and orders Pari to walk away so she can do Neeti’s ultrasound.

Afterward, when Rajeev sees the nurse, he pleads with her to save his Neeti and the baby who assures Rajeev that they are doing whatever they can.

Pari feels unsure if she should console Rajeev or not after the nurse walks away but puts her hand on Rajeev’s shoulder regardless.

Finding Pari near him, Rajeev embraces her in a hug for some strength in return Pari calms Rajeev down by announcing Neeti will be all right.

Later, on one hand, Pari is praying to lord Ganesh for Neeti’s quick recovery; on the other hand, Rajeev feels guilty seeing his first wife Pari praying for his second wife Neeti.

Meanwhile, the doctor is doing Neeti’s ultrasound while Pari is praying continuously for Neeti and after a while, Neeti wakes up with a panic attack.

The doctor puts Neeti to sleep by injecting her.

On the other hand, Pari and Rajeev are busy discussing if Neeti has learned about their marriage.

Recalling Neeti’s curiosity about the wedding picture, Rajeev informs Pari about how Neeti was looking around for it and Pari concludes that they are in danger if Neeti has seen it.

In the meantime, in Bajwa’s house, Gurinder is having headaches due to Neeti’s accident when Simmy enters her room.

Simmy then manipulates Gurinder so that every bad thing happens in the Bajwa family because of Pari.

Gurinder agrees with Simmy and Gurinder angrily announces that she will do something big that not even Parminder will take Pari’s side.

Elsewhere in the hospital, the doctor informs Pari and Rajeev that Neeti is out of danger but she does not want to see Pari or Rajeev who gets surprised to hear it.

When Rajeev enters Neeti’s hospital room, he teases Neeti for always coming back to the hospital without caring for him.

Neeti orders Rajeev to take care of his Pari who is waiting outside with a sneer and when Rajeev does not move, Neeti starts having a panic attack.

The doctor then orders Rajeev to leave the room, assuring Neeti that she is the only love of his life and Pari who is just entering the room, feels shaken after hearing this and runs away.

© Copyright tellybest.com, 2022, 2023. All Rights Reserved. Unauthorized use and/or duplication of any material from tellybest.com without written permission is strictly prohibited.
Cached Saved on: Wednesday 25th of January 2023 09:33:06 AMCached Disp on: Thursday 2nd of February 2023 08:55:33 PM