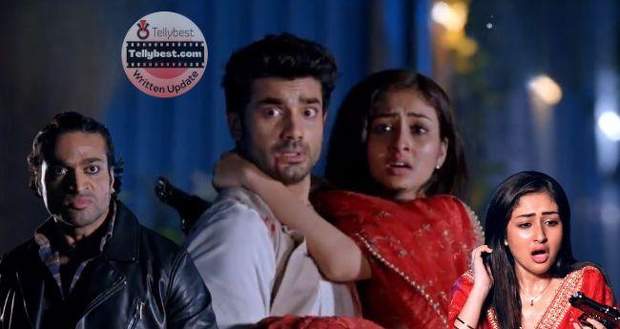 Today's Parineeti 3rd January 2023 episode starts with Pari and Rajeev greeting a stranger who asks them if they have run away from home.

Pari tells the stranger that she and Rajeev are husband-wife and some goons are after them.

While the old uncle looks surprised, Pari begs him to shelter them as her husband is very injured and the old uncle offers to help.

Looking at Rajeev’s injury, the old uncle informs Pari that Rajeev needs to see a doctor otherwise the blood loss can be a threat to him.

Later, in that old uncle’s home, Pari helps Rajeev to lie on the bed and the old uncle goes to make turmeric milk for him.

Rajeev urges Pari to call Monty so he comes here to pick them up but when Pari calls Monty, he is not able to hear anything due to a bad network.

Even Rajeev tries to give Monty the location but his efforts go in vain as Monty does not hear anything.

Once the call cuts, Neeti expresses her worry to Monty about Rajeev and Pari being in extreme danger.

Even when Monty tells Neeti that the police will soon find Rajeev-Pari, Neeti informs him that now they need to find Pari and Rajeev because the police are not reliable.

On the other hand, in the hut, Pari and Rajeev are resting when they hear a knock on the door but the old man orders them to hide in the closet.

When the old man opens the door, Leo asks him if he has seen a couple, and the old man nods.

In a stern voice, Leo offers ten thousand to the old man and the old man urges him to give him some advance.

Meanwhile, Pari and Rajeev are holding their breath in anticipation and Rajeev gets a call from Neeti but is not able to pick up.

Pari wishes for Rajeev’s safety whereas Rajeev hopes both of them get home safely.

However, much to Pari and Rajeev’s fortune, the old man gives points to a different location, and Leo and his goons walk away.

Afterward, the old man tells Pari and Rajeev that they are like a daughter and son-in-law to him in an emotional voice so he diverted the goons to the fake location.

This makes Pari happy and she thanks the old man for his help and the old man praises Pari-Rajeev for loving each other very much.

While the old man goes to bring milk, Pari helps Rajeev to lie on the bed while both of them remain silent.

Pari orders Rajeev to drink the turmeric milk like a loving wife when he refuses to drink.

Afterward, both of them get lost in each other's eyes, and Pari wishes she could stay with Rajeev this way forever.

Rajeev then feels dizzy and Pari announces that she will bring the doctor for him as per the old man's advice.

Rajeev tries to change Pari's mind since her life is in danger but Pari walks out after giving Rajeev Neeti's swear.

Meanwhile, in Ahlawat's mansion, Rakesh accuses his father of ruining his life but his father yells that he is doing everything to give Rakesh a comfortable life.

Later, while walking on the road, Pari meets some strangers who advise Pari to be careful as this area is very dangerous.

© Copyright tellybest.com, 2022, 2023. All Rights Reserved. Unauthorized use and/or duplication of any material from tellybest.com without written permission is strictly prohibited.
Cached Saved on: Wednesday 25th of January 2023 02:52:53 PMCached Disp on: Sunday 5th of February 2023 04:25:31 AM