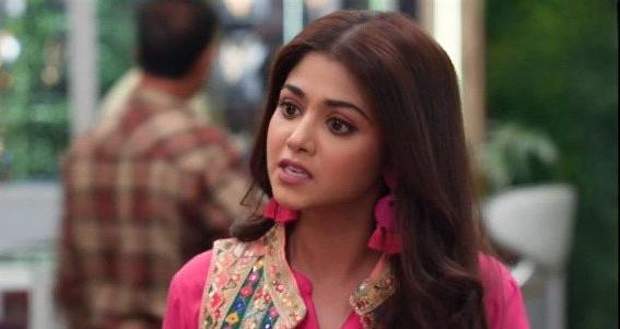 Today's Parineeti 3rd June 2022 episode starts with Rajeev finding a way to escape the nosy aunty situation by gifting them a gold coin.

Later, Rajeev requests the man at the counter not to inform them about him paying the bill and keeping it a secret and calls Mrs. Chadha at the counter.

The aunties get diverted and forget to bother Neeti.

Later, Parineet arrives near the mall while her dupatta flies away on Rajeev's face.

The flying dupatta reminds Rajeev of Parineet but he sits in the taxi in a hurry.

After some time, Neeti meets Parineet and they talk about their love life.

Further, Parineet asks Neeti if Sukhvinder should visit this jewelry shop to polish her old jewelry but Neeti refuses to invite her.

Worried about Sukhwinder's wish to arrive at Neeti's wedding and Neeti refusing to invite her, Parineet thinks about how Neeti will react after finding out about her arrival at Chandigarh.

On the other hand, Rajeev shares his worries about getting married to Neeti in three days and the thought of Parineet bugging him in the middle.

Monty suggests Rajeev avoid talking to Parineet till he gets married to Neeti.

Further, Neeti scolds Parineet by calling her by what relation she made a big decision in her life.

Neeti boasts that she is smart and can understand people much better than her.

Meanwhile, Parineet says that she is not practical like her and is emotional about relationships.

Parineet makes Neeti realize how her mother went through hardships to fulfill their upbringing and she is ungrateful for her hardworking mother.

Getting ashamed of her selfish decisions, Neeti takes a pause for a moment.

Neeti reminisces her memories with her mother and how she used to talk about her marriage all the time.

Crying tears of guilt and regret, Neeti walks into the corner to hide her face.