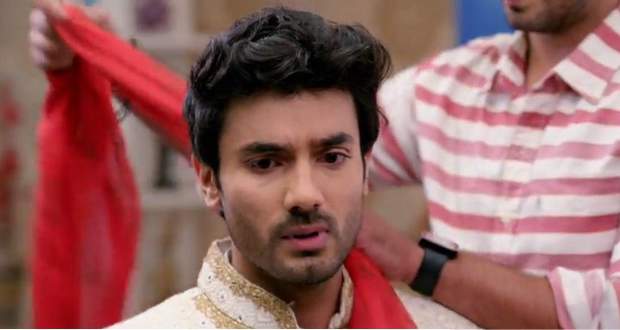 Today's Parineeti 3rd May 2022 episode starts with Rajeev and Parineet arriving at the mall while Parineet looks at him lovingly.

On the other hand, Rajeev thinks of a plan as he can do anything to be Neeti's husband.

Rajeev tries to plan on leaving Pari with the salesgirl at the mall and elope to the engagement venue.

As Pari leaves towards the dressing room, her bangles get stuck in Rajeev's sleeve.

Later, Neeti is annoyed with Sanju as he is getting late on his important day.

Meanwhile, Parineet arrives while Sanju is talking to Neeti on call, but Rajeev covers up the situation.

On the other hand, Vikram arrives at the engagement venue and looks at Neeti with love and appreciates her inner beauty as well.

Vikram reminisces his old memories with Neeti while he accidentally spills about his love for Neeti.

Neeti feels guilty and gets emotional after hearing Vikram's confession.

Vikram feels humiliated and embarrassed and decides to walk away as he cannot face Neeti anymore.

Later, Rajeev and Vikram cross paths but Vikram walks away as he is emotional and cries in the corner.

Neeti tries to stop Vikram and requests him to stay.

Vikram shares his best moment of life when Neeti asked him to run away from the village.

On the other hand, Parineet finds out that Rajeev has left him all alone at the mall.

Meanwhile, Neeti asks Vicky to meet Sanju as he will also adore him.

Pari is accused of stealing clothes from the mall as Pari was running toward a similar-looking man thinking of him as Rajeev.

Later, Rajeev tries to rush the priest and ask him to finish all the rituals early but the priest denies him.

Meanwhile, Vikram looks at the picture of Neeti's Sanju but it is spoiled with glitter.